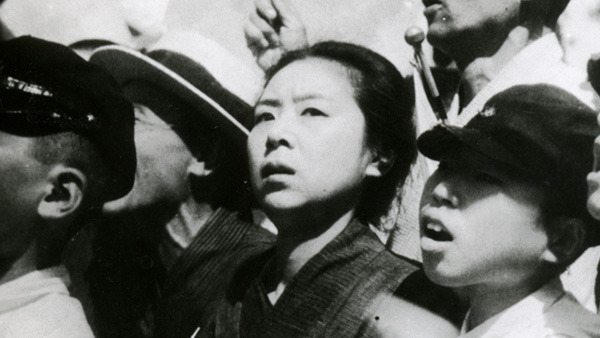 Army (陸軍 Rikugun, a powerful, multi-generational epic about military legacy and parental love during wartime, was directed in 1944 by Keisuke Kinoshita. The film starred Chishū Ryū and Kinuyo Tanaka.

The film’s silent, final scene was controversial at the time and barely escaped rejection by Imperial Japanese censors. In that scene, as her son marches off  for deployment to Manchuria, his mother (Kinuyo Tanaka) runs alongside him in tears. Apparently, the censors were concerned because Japanese mothers were supposed feel proud (not anxious) when their sons went off to battle.

In the end, the censors backed off and the scene remained – perhaps (as suggested by critic Donald Ritchie) because the mother’s display of emotion could be interpreted as caused by internal conflict between her duty to be proud and her own desire to love and possess him.   Others have suggested the scene was left intact because it was wordless. Nevertheless, the director Keisuke Kinoshita was not permitted to release another film for the remainder of the war.

This film seems to be another example of the sophistication and nuanced Japanese film industry during WWII. In comparison, it seems to me, characters in American films at the time were predictably brave, stoic and one-dimensional.

I was unable to find a film clip of this interesting movie, but here are interesting biography.