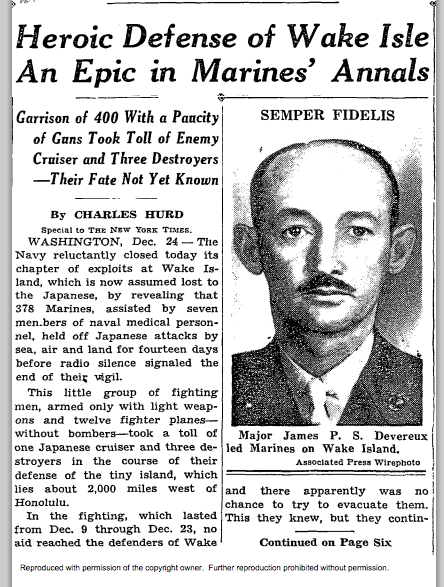 In the 15-day siege of Wake Island, U.S. losses included: 47 Marines killed with two MIA , three  U.S. Navy personnel and at least ten U.S. civilians killed, ten Chamorro civilians killed, and twelve civilians wounded. Japanese losses were estimated  700 –  900 killed with at least 300 more wounded. Two Japanese destroyers at least 28 land-based and carrier aircraft were shot down or damaged during two attacks on the island. The Japanese captured all men remaining on the island most of whom were civilian contractors.

Rather than assault the island, the U.S. Navy established a submarine blockade and bombed the island periodically until the end of the war in 1945.

In October 1943, U.S. naval aircraft from Yorktown raided Wake. Two days later, fearing an imminent invasion, Rear Admiral Shigematsu Sakaibara ordered the execution of the 98 captured American civilian forced laborers remaining on the island. One of the prisoners escaped the massacre and carved: 98 US PW 5-10-43 on a large coral rock near where the victims had been hastily buried in a mass grave. The unknown American was recaptured and beheaded.