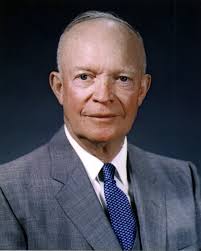 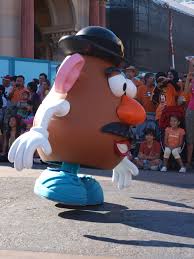 Mr Potato Head
https://youtu.be/g58CFvquOtE Mr. Potato Head was invented by George Lerner in 1949 and first manufactured and distributed by Hasbro in 1952. The first toy advertised on television, Mr. Potato Head has remained in production since its debut. Although the toy was originally produced as separate plastic parts with pushpins that could be stuck into a real potato or other vegetable, complaints regarding rotting vegetables and new government safety regulations, resulted in the production of a plastic potato body in 1964. Source: Wikipedia
Read More 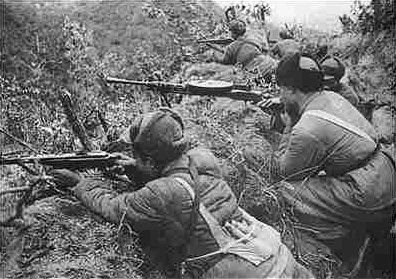 BATTLE OF TRIANGLE HILL
The Battle of Triangle Hill (上甘岭战役) was a protracted military engagement during the Korean War that pitted two United Nations infantry divisions and the US Air Force, against elements of the 12 and 15th Corps of the Chinese People's Volunteer Army (PVA).  The battle was part of UN attempts to gain control of "The Iron Triangle", and took place from 14 October to 25 November 1952. Wikipedia Despite superiority in artillery and aircraft, after 42 days of escalating UN casualties, the attack was called off and PVA forces regained their original positions.
Read More 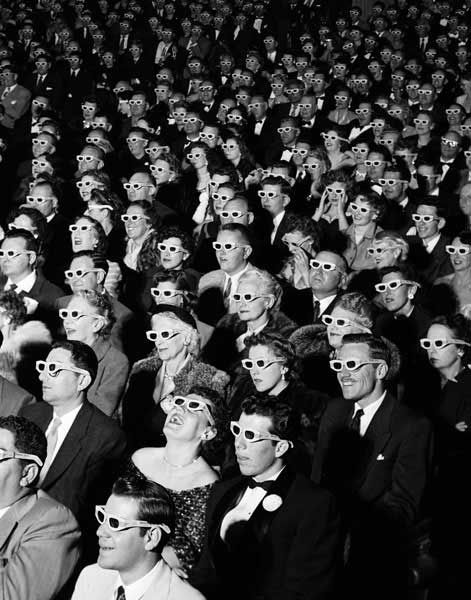 3D Movies
https://youtu.be/TmmFDyhCufc Many consider the "golden era" of 3D to be late 1952 with the release of the first color stereoscopic feature, Bwana Devil.  The film was projected dual-strip, with Polaroid filters.  Viewers used disposable anaglyph glasses made of cardboard. Although panned by critics, Bwana Devil was nevertheless highly successful with audiences due to the novelty of the technique, which increased Hollywood interest in 3D during a period of declining box-office admissions. Because 3D features utilized two projectors, the capacity limit of film being loaded onto each projector (~ 6,000 feet) was an hour's worth of film. Therefore an intermission was necessary for every feature-length film. Intermission points were often written into the script at a major plot point. Source: Wikipedia
Read More 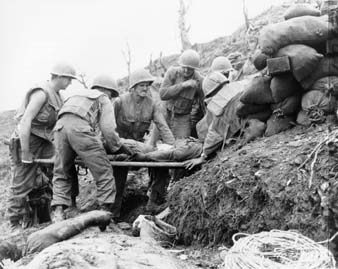 Battle of Old Baldy
https://youtu.be/TEgZ3lqWzZQ The Battle of Old Baldy refers to a series of five engagements for Hill 266 in west-central Korea. They occurred over a period of 10 months in 1952–1953, though there was also vicious fighting both before and after these engagements. Main Source: Wikipedia Initial Fights for Old Baldy The constant fighting for control of Old Baldy was typical of the savage, see-saw battles waged in the summer and fall of 1952.
Read More 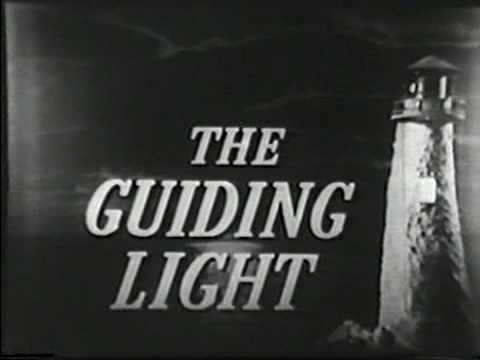 The Guiding Light
https://youtu.be/egI5QDtHhC0 The Guiding Light was broadcast on NBC, then CBS radio from 1937-1956 and on CBS TV from 1952-2009. The original NBC radio series (broadcast in 15-minute episodes) was based on the personal experiences of writers Emmons Carlson and Irna Phillips who found spiritual comfort in the radio sermons of Chicago preacher Preston Bradley, founder of the People's Church. The series was transferred to CBS Radio in 1947. Over the years, Guiding Light had many different cast members and plot sequences and different writers that developed complex story lines. Airing for 72 years on radio and television, Guiding Light was America's longest running soap opera.  Source: Wikipedia https://youtu.be/307s1yFYwq8
Read More 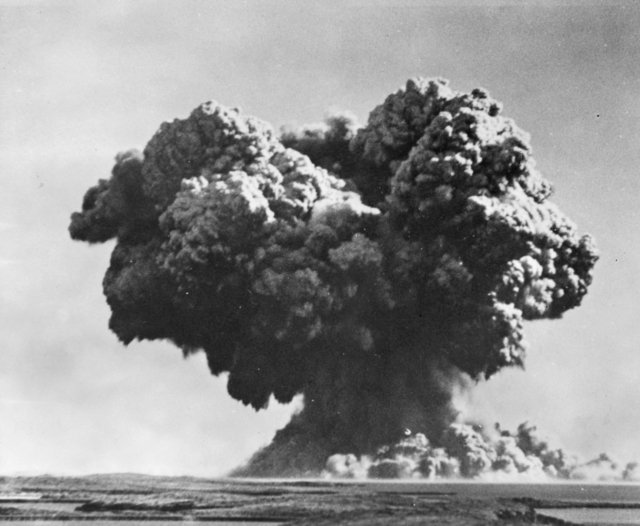 Britain Develops Atomic Bomb
Although several British scientists worked on the Manhattan Project during WWII, after the war the U.S. government ended cooperation on nuclear weapons development. In 1947, in response to concerns about American isolationism and Britain losing its great power status, the British cabinet decided, to resume efforts to build nuclear weapons.  In October 1952, Britain successfully detonated a plutonium implosion device to become the world's third nuclear power after the United States and Soviet Union. Source: Wikipedia
Read More 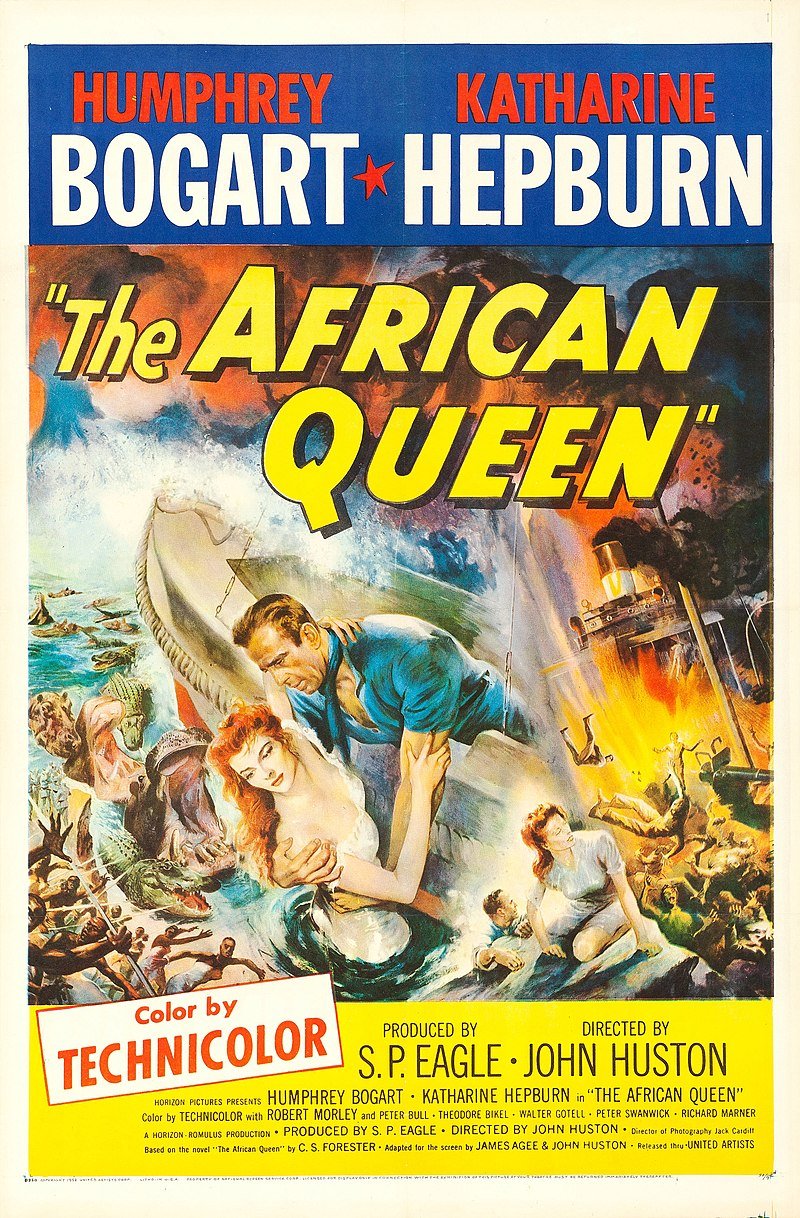 The African Queen
The African Queen was a 1951 film adapted from a 1935 novel by  C. S. Forester. Directed by John Huston, the film starred Humphrey Bogart and Katharine Hepburn. Bogart won the 1952 Academy Award for Best Actor. In 1994, the film was was selected for preservation in the U.S. National Film Registry; and the Library of Congress deemed it "culturally, historically or aesthetically significant". Source: Wikipedia
Read More 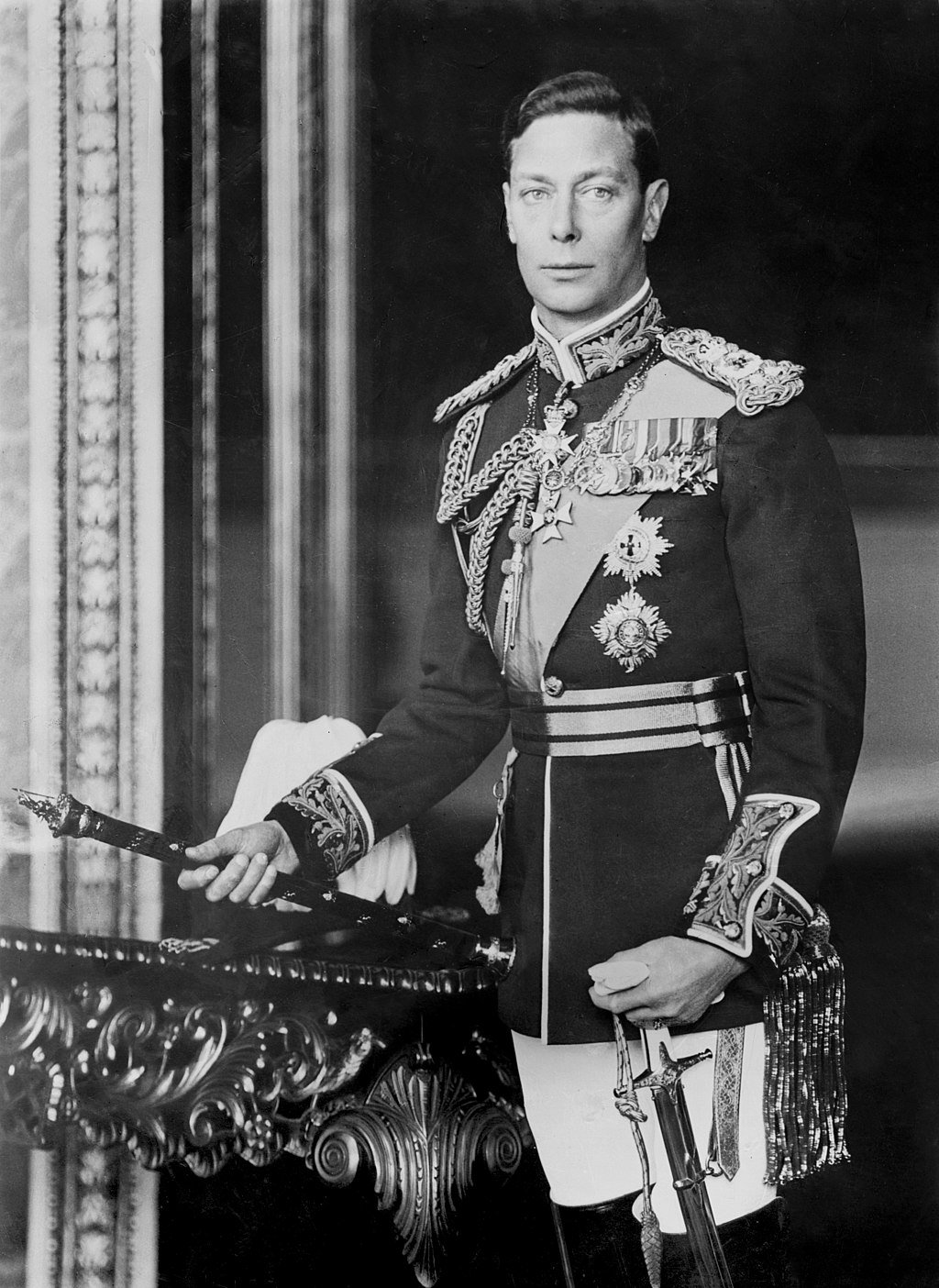 Death Of King George VI
A heavy smoker, King George VI (born Albert Frederick Arthur George) died of lung cancer and heart disease in February 1952. Born during the reign of his great-grandmother Queen Victoria George was named after his great-grandfather Albert, Prince Consort. As the second son of King George V, he was not expected to inherit the throne and spent his early life in the shadow of his elder brother Edward VIII. However, only months into his reign, Edward abdicated the throne to marry the American divorcee  Wallis Simpson and George became king. https://youtu.be/iNsycPECZCo During WWII George was seen as sharing the hardships of the common people and he became known as a symbol of British determination to win the war. Although Britain and its allies were victorious in 1945, the British Empire declined—Ireland had largely broken away, followed by independence of India and Pakistan in 1947. George relinquished the title of Emperor of India in June 1948 and adopted the new title of Head of the Commonwealth. Main source: Wikipedia In the 1920s, George had partially effective speech therapy for stammering. https://youtu.be/gSw6ei5tdbg
Read More

First Indochina War – 1947-1954
https://youtu.be/8kgcUFU5_eA After WWII, the decolonization of French Indochina left the region divided into four independent states: North Vietnam, South Vietnam, Cambodia, and Laos. In September 1945, a provisional government in Hanoi declared the independence of the Democratic Republic of Viet Nam (DRV). The war that followed between the communist-led forces of the DRV and the forces of the French Union led to the creation of the two Vietnamese states, each claiming to embody the true national identity. Source: Joint Chiefs of Staff Viet Minh soldier - Pinterest Việt Minh (abbreviated from Việt Nam độc lập đồng Minh) — English: League for the Independence of Vietnam, was a coalition formed by Hồ Chí Minh in May1941. In early 1950 the Viet Minh had shifted from guerilla to conventional warfare, and for the next four years, large-scale assaults ranging upward to 14-battalion strikes -- were not uncommon. In 1952 a three-division assault in one province forced the withdrawal of over 20,000 French troops. In 1952-53 nearly 6,000 French and Legionnaires troops were killed, as well as 7,730 of their Vietnamese allies. Source: Digital History Portside.org "The United States decision to provide military assistance to France and the Associated States of Indochina was announced in May 1950.... The decision was taken in spite of the U.S. desire to avoid direct involvement in a colonial war, and in spite of a sensing that France's political-military situation in Indochina was bad and was deteriorating. Moreover, predictions that U.S. aid would achieve a marked difference in the course of the Indochina War were heavily qualified." The Pentagon Papers
Read More 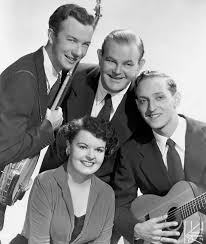 The Weavers Wimoweh
https://youtu.be/77VUYPVMtWY Wimoweh - 1952 The Weavers were an American folk quartet from Greenwich Village in New York City who sang traditional folk songs from around the world, as well as blues, gospel music, children's songs, labor songs, and American ballads. Their style inspired the commercial folk music boom that followed them in the 1950s and 1960s. The Weavers were formed in 1948 by Ronnie Gilbert, Lee Hays, Fred Hellerman, and Pete Seeger. The group took its name from Die Weber a play written by Gerhart Hauptmann in 1892 that depicted the uprising of the Silesian weavers in 1844. The Weavers first big hit was in 1950 with Lead Belly's "Goodnight, Irene", backed with the 1941 song "Tzena, Tzena, Tzena", which also became a best-seller. During the Great Red Scare of the early 1950s, their manager advised the group not to sing their most explicitly political songs and to avoid performing at "progressive" venues and events. Because of this, some folk song fans criticized them for watering down their beliefs and commercializing their singing style. Encouraging sing-alongs in their concerts, sometimes Seeger would shout out the lyrics in advance of each line. The Weavers introduced many folk revival standards to new audiences. Their hits included: On Top of Old Smoky Follow the Drinking Gourd Kisses Sweeter than Wine, Sloop John B Rock Island Line The Midnight Special Pay Me My Money Down Darling Cory and their 1952 hit "Wimoweh." Major Source: Wikipedia https://youtu.be/MSDyiUBrUSk
Read More 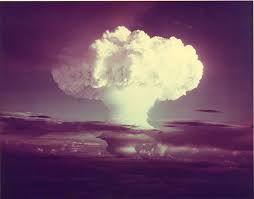 Truman Announces U.S. Has Hydrogen Bomb
In his state of the union address in January 1952, President Harry Truman announced that the U.S. had successfully developed a hydrogen bomb. A thermonuclear weapon, fusion weapon or hydrogen bomb (H bomb), is a second-generation nuclear weapon design. Its greater sophistication affords it vastly greater destructive power than first-generation atomic bombs, a more compact size, a lower mass or a combination of these benefits. Characteristics of nuclear fusion reactions make possible the use of non-fissile depleted uranium as the weapon's main fuel, thus allowing more efficient use of scarce fissile material such as uranium-235(235U) or plutonium-239 . Modern fusion weapons consist essentially of two main components: a nuclear fission primary stage (fueled by 235U or 239Pu) and a separate nuclear fusion secondary stage containing thermonuclear fuel: the heavy hydrogen isotopes deuterium and tritium, or in modern weapons lithium deuteride. For this reason, thermonuclear weapons are often colloquially called hydrogen bombs or H-bombs. https://youtu.be/VLdOqfM1eKM
Read More