Etched in the Sand on Normandy Beach 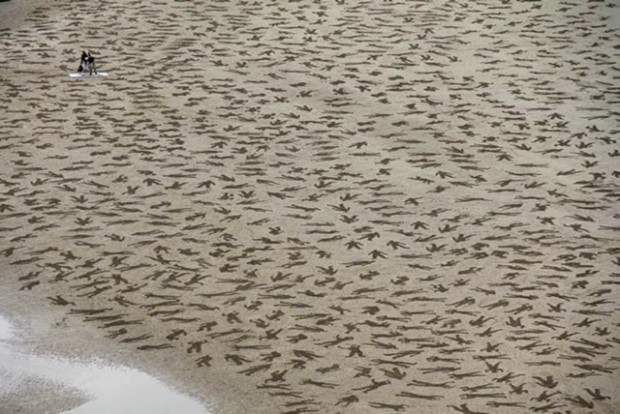 On June 6, 1944, more than 160,000 Allied troops landed along a 50-mile stretch of heavily-fortified French coastline, to fight Nazi Germany on the beaches of Normandy. Allied casualties on the first day were at least 10,000, with 4,414 confirmed dead. The Germans lost 1,000 men.

This largest seaborne invasion in history began the invasion of German-occupied western Europe, led to the restoration of the French Republic, and contributed to an Allied victory in the war.

With 60 volunteers, Artists Jamie Wardley and Andy Moss recently etched silhouettes representing 9000 fallen German and Allied soldiers and civilians into the sand of Normandy.  The Fallen 9000 is a stark visual reminder of the immense losses during the D-Day beach landings on June 6th, 1944.

The installation lasted only a few hours before being washed away by the tide.