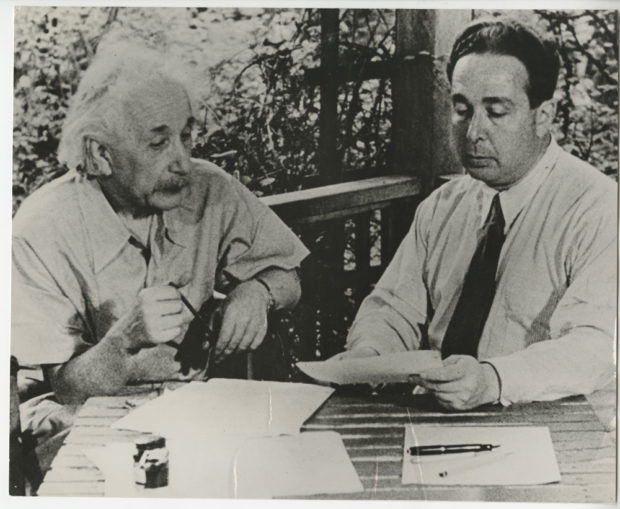 The concept of a nuclear chain reaction reportedly came to the physicist Leó Szilárd as an epiphany while waiting to cross a London street in 1933.

“…It suddenly occurred to me that if we could find an element which is split by neutrons and which would emit two neutrons when it absorbed one neutron, such an element, if assembled in sufficiently large mass, could sustain a nuclear chain reaction.”

With his theory rejected by prominent physicists of the time, Szilárd, a Hungarian Jewish refugee, pursued his own research experiments. When, in 1939, German physicists bombarded uranium with neutrons, causing it to split in two and release extra neutrons in the process, Szilárd realized the scientific and military implications. Concerned that Nazi Germany might first develop a nuclear weapon, Szilárd composed a letter U.S. President Franklin Delano Roosevelt and convinced his celebrity friend Albert Einstein to sign it instead of him. FDR responded with interest and the Manhattan Project was ultimately born in 1942. 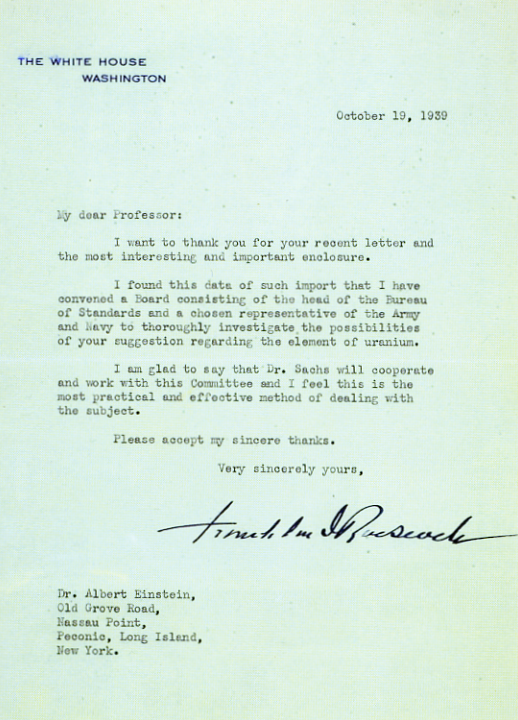 But with the defeat of Nazi Germany looming in the Spring of 1945, Szilárd co-authored the Franck Report that warned of a possible nuclear arms race  or war with Russia that would cost more lives than might be saved by using the atomic bomb against Japan. On the 4th of July, 1945, he sent this petition to fellow scientists.

Inclosed is the text of a petition which will be submitted to the President of the United States. As you will see, this petition is based on purely moral considerations.

It may very well be that the decision of the President whether or not to use atomic bombs in the war against Japan will largely be based on considerations of expediency. On the basis of expediency, many arguments could be put forward both for and against our use of atomic bombs against Japan. Such arguments could be considered only within the framework of a thorough analysis of the situation which will face the United States after this war and it was felt that no useful purpose would be served by considering arguments of expediency in a short petition.

However small the chance might be that our petition may influence the course of events, I personally feel that it would be a matter of importance if a large number of scientists who have worked in this field went clearly and unmistakably on record as to their opposition on moral grounds to the use of these bombs in the present phase of the war.

Many of us are inclined to say that individual Germans share the guilt for the acts which Germany committed during this war because they did not raise their voices in protest against these acts. Their defense that their protest would have been of no avail hardly seems acceptable even though these Germans could not have protests without running risks to life and liberty. We are in a position to raise our voices without incurring any such risks even though we might incur the displeasure of some of those who are at present in charge of controlling the work on “atomic power”.

The fact that the people of the people of the United States are unaware of the choice which faces us increases our responsibility in this matter since those who have worked on “atomic power” represent a sample of the population and they alone are in a position to form an opinion and declare their stand.

Anyone who might wish to go on record by signing the petition ought to have an opportunity to do so and, therefore, it would be appreciated if you could give every member of your group an opportunity for signing.   Leo Szilard

Was the atomic bombing of Japan justifiable?.

Reportedly, many others in the U.S. government and military at the time were opposed to use of the atomic bomb:

OTHER OPTIONS BESIDE A-BOMB

Those who defend the bombings always invoke the alternative of a full-scale invasion of the Japanese homeland, Operation Downfall, which would have undoubtedly caused many American and Japanese casualties. The numbers are debatable, but estimates range from the hundreds of thousands to the millions

But the Allies had several other options available in 1945:

Hiroshima was chosen as a first target for the atomic bomb because it had not yet been bombed during the war and could therefore emphasize the power of the bomb.

Clarifying the Potsdam Declaration which continued to demand “unconditional surrender.” The Allies could have made it clear that the Emperor would be allowed to continue in a symbolic role.

Waiting for the Soviets.The USSR had been promised several concessions, including the island of Sakhalin and the Kuril Islands  for their entry in the war, but by late July 1945, the Americans were having second thoughts.