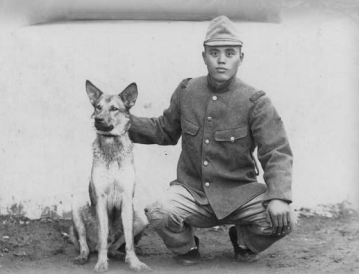 Excerpts from the diary of Tamura Yoshikazu.

When I hear birds of paradise sing, I remember cuckoos back in Japan. They live among tropical coconut trees. I don’t know what they are saying, but they make very weird cries that sound like “keukoh, kiou, keukoh, kiou.”

A mate of mine received a letter from home and he showed me a copy of a
newspaper dated the end of January. Nothing seemed to have changed at
home. It also contained an article about the front line in New Guinea. Who
could know that I am in New Guinea now?

The climate here is similar to that of mid-August in Japan. Yet, there are so many
noxious insects, and the mosquitoes in particular are a real nuisance. Since many of
us are sick and do not feel well, our fighting spirit seems to be low.

A few days ago, my friend was killed by enemy shells in this bay. However, the
bay with its white waves does not look any different. There are a few drums
floating away from boats. The landscape of the headland is as lush as before.
Boats are moored to the wharf as before. But I feel so devastated!

From the top of the hill with its fresh green grass
I gaze towards the ocean horizon.
Across the Pacific, across the Japan Current,
From far away, a boat is coming with might and courage
With letters from our homeland.
Sitting in the shade of a coconut tree
Looking across the sky above the ocean waves
Thinking about home from New Guinea.
With the heat, it hurts to realize
How far this place is from home.

Tamura Yoshikazu was killed in battle in March 1944 at Biliau, New Guinea.