Anne Frank was a teenage writer who hid in Amsterdam with her family for two years during the Nazi occupation of Holland. She chronicled her feelings and experiences in a diary that became renowned after the war. She was 15 years old when the location of the family was betrayed and they were sent to the camps, where she died. Her work, The Diary of Anne Frank, has since been read by millions worldwide. 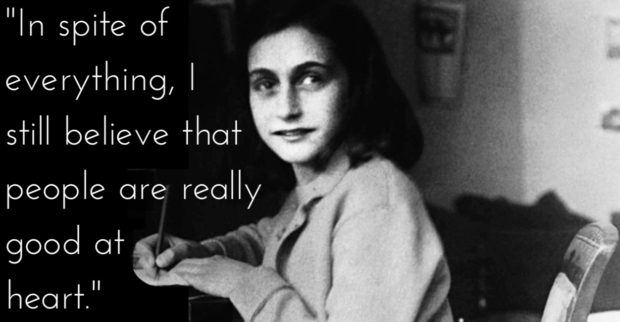 “… Believe me, I’d like to listen, but it doesn’t work, because if I’m quiet and serious, everyone thinks I’m putting on a new act and I have to save myself with a joke, and then I’m not even talking about my own family, who assume I must be ill, stuff me with aspirins and sedatives, feel my neck and forehead to see if I have a temperature, ask about my bowel movements and berate me for being in a bad mood, until I just can’t keep it up any more, because when everybody starts hovering over me, I get cross, then sad, and finally end up turning my heart inside out, the bad part on the outside and the good part on the inside, and keep trying to find a way to become what I’d like to be and what I could be if … if only there were no other people in the world.”