Burmese Harp / Grave of the Fireflies 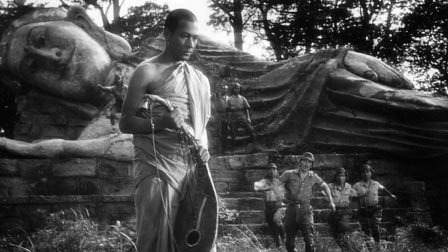 Adapted from the novel by Michio Takeyama, this 1956 film directed by Ichikawa Kon, involves a company of Japanese Imperial Army troops who finally surrender in the last desperate stages of the Burma campaign. When their company commander begins to lead them in songs from their homeland, they discover renewed energy and the will to survive.  After they surrender, one of the men, a harp player, fails to convince another group of soldiers holed up in a cave to surrender. Disguised as a Buddhist monk, he escapes to systematically bury dead Japanese troops scattered about the countryside. The film is very powerful and touching.

You don’t have to know Japanese to understand this film trailer.

Grave of the Fireflies is a 1988 animated film adapted from the 1967 short story of the same name written by Akiyuki Nosaka. Based on his own experiences during the firebombing of Kobe in 1945, the book was written as a personal apology to his younger sister Keiko who died of starvation under his care after the bombing.