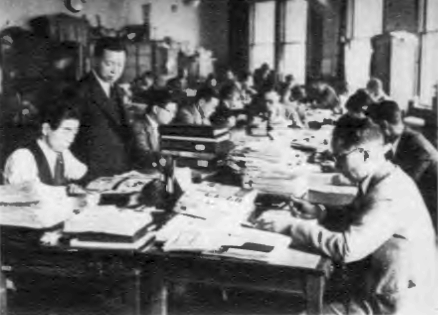 Since feudal times, the Empire of Japan had a long tradition of censorship of political discourse. In 1936, the Information and Propaganda Committee issued all official press statements and worked with the Publications Monitoring Department to censor all types of media. The committee issued detailed guidelines to publishers and made (mandatory) suggestions. Any book, magazine, news article or photograph “unfavorable” to the Imperial Army or portraying atrocity (e.g.,Soldiers Alive, Tatsuzō Ishikawa’s account of the Nanjing massacre) was prohibited. Writers deemed to promote dissidence were frequently imprisoned.

A 1941 revision of the National Mobilization Law eliminated freedom of the press completely. All mail was now subject to scrutiny. In February 1942, all newspapers were ordered to merge, or to cease publication. The Japan Publishers Association agreed to screen all publication drafts before final submission to the official government censors. As the Pacific War situation deteriorated,  the government assumed control of all paper supplies, and permitted use only for official policy issues. In 1944, only 34 magazines were left in publication. In 1945, only one newspaper was permitted per prefecture.

read more:   Censorship in the Empire of Japan – Wikipedia, the free encyclopedia.