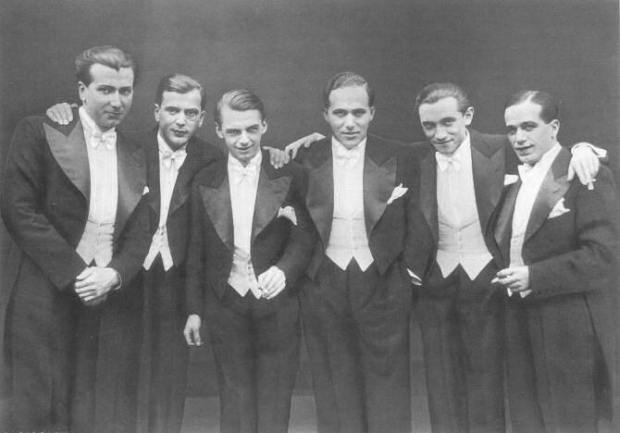 The Comedian Harmonists were an internationally famous, all-male German, close harmony ensemble that performed between 1928 and 1934 as one of the most successful musical groups in Europe before World War II.

The group’s success continued into the early 1930s, but eventually ran into trouble with the Nazi regime because three of the group members were either Jewish or of Jewish descent, and one had married a Jewish woman.

In Nazi Germany the group’s professional life became increasingly difficult, and they were ultimately prohibited from performing in public. After their last last concert in Hannover in 1934, they sailed to America and gave several concerts but eventually returned home. Attempts to reform the group outside Germany by their Jewish members and within Germany by those remaining were relatively unsuccessful. By 1941, both groups had broken up. Although all members survived the war, they never re-formed after the war.

In the 1997 German movie Comedian Harmonists (released in the USA as The Harmonists), the actors lip-synched the musical performances to the group’s original recordings.