In a 1939 census of Nazi Germany (including annexed Austria), 54% of Germans considered themselves Protestant, 40% Catholic, 3.5% gottgläubig (non-sectarian believers in God) and 1.5% as non-religious. 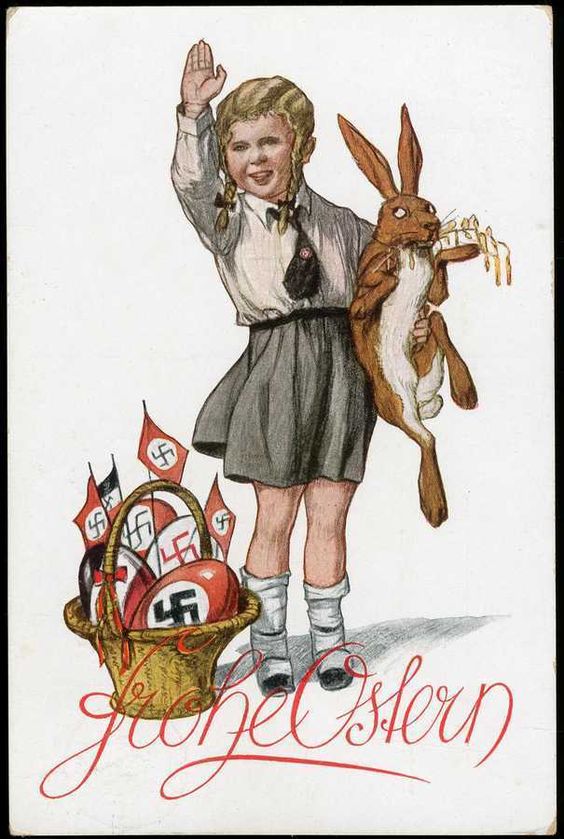 In the spring of 1936, Der Angriff, Berlin’s Nazi paper founded by Propaganda Minister Joseph Goebbels, proclaimed that the egg trade, one-fourth Jewish before the Nazis assumed power, was now Judenrein—free of Jews.

Although some Nazi leaders (including Martin Bormann, Joseph Goebbels, Alfred Rosenberg, and Heinrich Himmler) were distinctly opposed to Christian churches, some such as Hans Kerrl, the Minister for Church Affairs pushed for a unique Nazi form of “Positive Christianity” which rejected the Old Testament and Jewish origin of the religion. The small pagan Deutsche Glaubensbewegung (German Faith Movement), which worshipped the sun and seasons, supported the Nazis.

Hitler’s plan to create a unified Protestant Reich Church failed, with strong resistance from Martin Niemöller, Dietrich Bonhöffer and members of the Confessing Church (Bekennende Kirche). Although a 1933 Concordat between the Third Reich and the Vatican promised to respect Church autonomy, all Catholic institutions whose functions were not strictly religious were closed and many Catholic clergy, nuns, and lay leaders were arrested over the ensuing years.