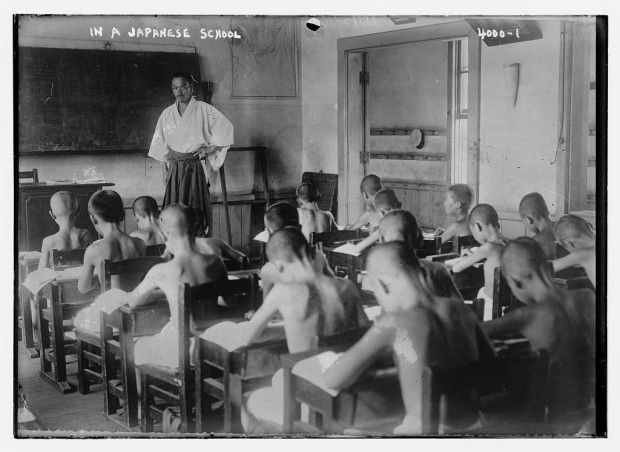 After opening to the West in the late 19th century, Imperial Japan created a public school system based closely on the American model with additional emphasis on traditional Japanese values. Reflecting Confucian principles, a social hierarchy, with the Meiji state at its pinnacle, was prescribed.

Centralized government control, as defined in the 1890 Imperial Rescript on Education, remained in place until the end of WWII. In 1907 compulsory education was extended to six years. Middle schools were established as preparatory institutions for students aspiring admission to Imperial Universities. And Imperial Universities were charged with developing leaders to direct the modernization of Japan.

Only textbooks approved by the Ministry of Education were allowed in a curriculum centered on moral education and patriotism, mathematics, design, reading and writing, composition, Japanese calligraphy, Japanese history, geography, science, drawing, singing and physical education.

As Japan’s government became increasingly militaristic from 1912-1937, protest movements by teachers and students were vigorously suppressed and the Imperial Rescript to Soldiers and Sailors became compulsory reading for students.

In 1941, elementary schools were renamed National People’s Schools and students were required to attend Youth Schools for basic military and vocational training upon graduation. Shinto textbooks such as the Kokutai no Hongi became required reading and emphasis was placed on teaching traditional political values, religion and morality. Emperor worship and loyalty to the nation were promoted as ancient military virtues.

After the war, U.S. occupation authorities abolished the old educational system and established a new one.

Read more: Education in the Empire of Japan – Wikipedia, the free encyclopedia