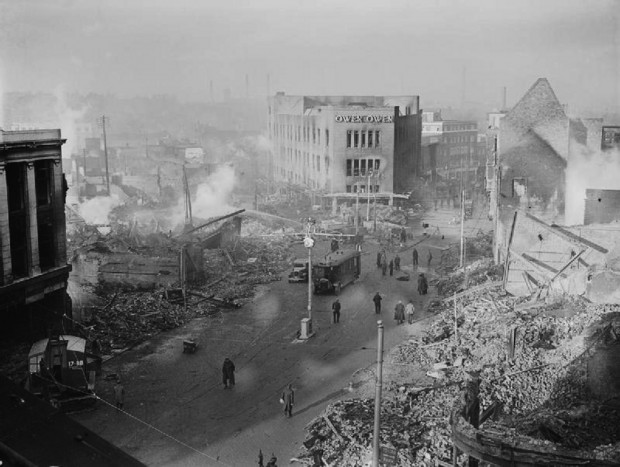 As I learn more about the firebombing in WWII, I realize that I haven’t given the November 1940 Luftwaffe Blitz of Coventry adequate attention. It is important because it seems to have been the first instance where a new type of tactic was used.

As an industrial city, Coventry was a genuine military target for the Luftwaffe during the Battle of Britain. Seventeen relatively small raids during August-October 1940 killed 176 people and injured ~180.

On November 14, 1940, over 500 German bombers carried out Operation Mondscheinsonate (Moonlight Sonata) in a new method of attack:

– the first wave of  bombers dropped high explosive bombs intended knock out utilities, damage roads, hamper the fire brigades and damage roofs, making it easier for the incendiary bombs to fall into buildings and ignite them.

– subsequent attack waves dropped incendiary bombs (some on parachutes) made of magnesium or petroleum.

Coventry Cathedral, set on fire by incendiaries, precipitated a firestorm that quickly spread out of control. Simultaneously > 200 other fires broke out, mostly in the city-center area. In about four hours, more than 4,300 homes in Coventry were destroyed and ~2/3 of the city’s buildings were damaged. ~ 568 people were killed in the raid, 863 badly injured and 393 sustaining lesser injuries.

The Coventry raid resulted in such a new and severe level of destruction that Nazi Propaganda Minister Joseph Goebbels later coined the term coventriert (“coventried”) to describe similar levels of destruction in other raids.

The RAF raid on Lübeck in March 1942, designed after the Coventry Blitz, was the first time the British tested their firebombing techniques.