In Nordic Mythology Ragnarök  refers to a prophesied war among various beings and gods that ultimately results in the destruction and renewal of the world. In Richard Wagner’s four opera adaptation of Nordic myth Ring des Nibelungen, the final opera was entitled Götterdämmerung (twilight of the Gods). Wagner was one of Adolf Hitler’s favorite composers and his music was performed at many party rallies and functions.

In April 1945, with the Allies closing in on all sides, the Third Reich was in great disarray.

April 23 – Hermann Göring (ensconced in the Obersalzburg in Bavaria) sent a radiogram to Hitler’s Berlin Führerbunker, asking to be declared Hitler’s successor. Although he had issued a secret decree in 1941 naming Göring his successor, Hitler reportedly flew into a rage, convinced that Göring was attempting a coup d’état. Hitler’s personal secretary Martin Bormann then ordered the SS to arrest Göring for treason.

April 28 – Hitler learned that the Reichsführer of the SS and Chief of German Police Heinrich Himmler was attempting to discuss surrender terms with the Allies. He ordered Himmler arrested and his SS aide at the Führerbunker in Berlin shot.

April 1945 – Responsible for carrying out the Demolitions on Reich Territory Decree issued by Hitler in March 1945, Albert Speer convinced Nazi generals and Gauleiters to ignore the order. Later known as the Nero Decree this scorched earth order stated: All military transport and communication facilities, industrial establishments and supply depots, as well as anything else of value within Reich territory, which could in any way be used by the enemy immediately or within the foreseeable future for the prosecution of the war, will be destroyed. 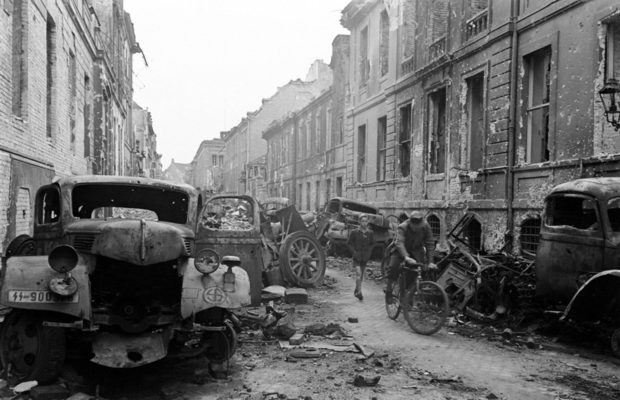