Samhain, celebrated by ancient Celts on October 31st marked the beginning of the cold and bleak part of the year, often associated with death. The Catholic Church later transformed Samhain into a religious event known as All Hallows Eve (the evening before All Saints’ Day). Many European immigrants to America believed that wearing a mask on All Hallows Eve might prevent ghosts from recognizing them. And bowls of food were placed on doorsteps to satisfy ghosts that might otherwise enter a home.

The blending of European and Native American beliefs resulted in the uniquely American holiday of Halloween. The first American Halloween celebrations included public events created in honor of the harvest. By mid-19th century, the celebration involved spending the night with friends, dancing, singing, telling spooky stories and reading fortunes. 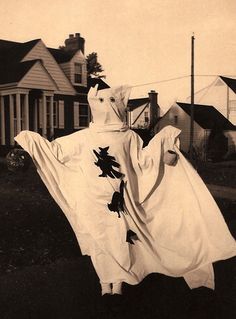 With both mothers and fathers spending more time out of the home with war work, supervision of children and teenagers was often diminished. The result was widespread fear of juvenile delinquency, drug use and criminal behavior. Ordinary Halloween vandalism now seemed a more serious crime and the younger generation was thought to be out of control.

Many communities cancelled Halloween activities in 1942. But others sought to entice would-be delinquents off the streets with costume parties, dances, and other supervised activities – Halloween vandalism fell off in 1942, and after the war, neighborhoods trick-or-treating became the norm.