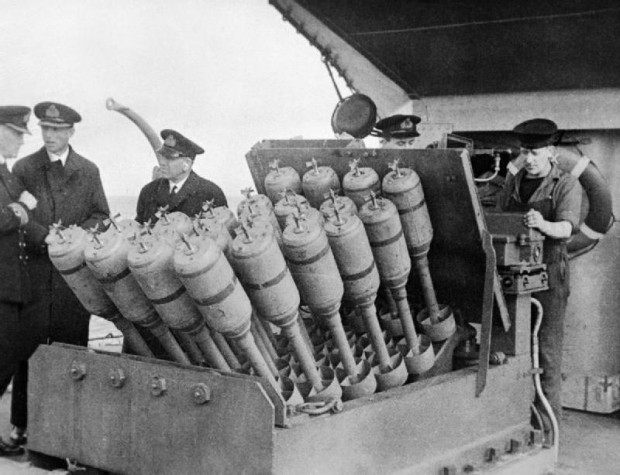 In 1942 the British Royal Navy introduced a new forward-throwing anti-submarine weapon to supplement the depth charge. Nicknamed the hedgehog after its configuration of small spiked fittings mounted on a mortar bomb, the Hedgehog exploded on contact, rather than at a certain time or depth.

The hedgehog was soon adopted successfully by the US Navy and used throughout WWII. The US Navy subsequently produced a rocket version of the Hedgehog called the Mousetrap.

Hedgehog projectiles had a diameter of 7 inches and weighed 65 lbs. with an explosive charge of 35 lbs. of Torpex. Sinking speed was ~23 feet per second. The projectiles were angled to give a circular pattern 40 yards in diameter about 200 yards ahead of a stationary ship.

Advantages of the hedgehog were:

1. They only exploded if they hit something, so the firing ship could make a swift follow-up attack

2. Unsuccessful attacks did not disturb the water, so ASDIC/Sonar performance was not affected

3.  With a higher sinking rate than conventional depth charges, the hedgehog sped up follow-up attacks.