In October 1947 the House Un-American Activities Committee (created in 1938) re-convened in Washington D.C. for public hearings on alleged communist infiltration within the American motion picture industry.

50 top Hollywood executives decided to suspend those who opposed the hearings (the “Hollywood Ten“) until their acquittal or declaration that they were not Communists. Artists and writers were barred from work if they refused to testify, expressed sympathy for Communism or held real/alleged membership in the  American Communist Party. 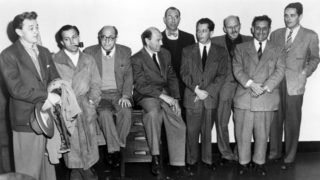 in November 1947 Congress cited the Hollywood Ten as  being in contempt of Congress for refusing to answer questions about alleged Communist influence in the movie industry. In April 1948, each of the Hollywood Ten was found guilty and sentenced to spend a year in prison and pay a $1,000 fine.

The blacklist lasted until 1960, when Dalton Trumbo (a member of the Hollywood 10) was credited as the screenwriter of the highly successful film Exodus, and later acknowledged as author of the screenplay for the movie Spartacus. However,  many of those blacklisted, remained barred from work in Hollywood for several  more years;