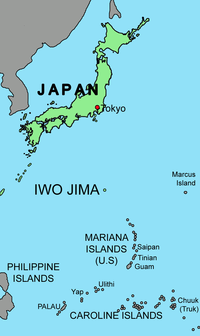 Iwo Jima is a rocky island in the volcano islands archipelago of Japan,~760 miles south of Tokyo. It is only 5 miles long and from 800 yards to 2.5 miles wide.

Located mid-way between the Marianas and the Japanese mainland, Iwo Jima provided a base for Japanese fighters to intercept  U.S. bombers attacking the home island.  Japanese airfields on the island were also used to launch attacks against American bases newly established in the Marianas.

After months of naval and air bombardment, ~70,000 U.S. Marines invaded Iwo Jima where ~18,000 Japanese defenders were dug into bunkers deep within the volcanic rocks. In a little over a month, ~7,000 U.S. Marines were killed and another 20,000 were wounded. Only 216 Japanese soldiers were captured; the rest were killed in action.

Iwo Jima was the only battle in the Pacific War where total U.S. Marine casualties exceeded those of Japanese forces. 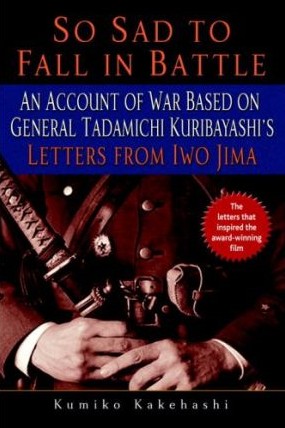 “We are here to defend this island to the limit of our strength. We must devote ourselves to that task entirely. Each of your shots must kill many Americans. We cannot allow ourselves to be captured by the enemy. If our positions are overrun, we will take bombs and grenades and throw ourselves under the tanks to destroy them. We will infiltrate enemy’s lines to exterminate him. No man must die until he has killed at least ten Americans. We will harass the enemy with guerilla actions until the last of us has perished. Long live the Emperor!”

Based on his letters home, the book So Sad to Fall in Battle by Kumiko Kakehashi is a fascinating account of this unique warrior – part-time writer, haiku poet, diplomat and General of the Imperial Japanese Army General Staff.

Clint Eastwood, deciding to narrate the Battle of Iwo Jima from both the American and the Japanese point of view, directed the two excellent films Flags of Our Fathers  and Letters from Iwo Jima.