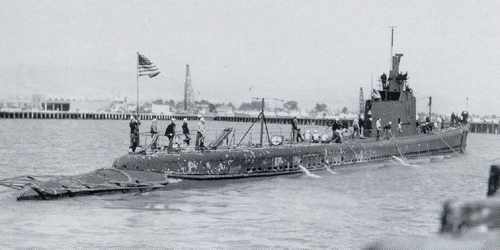 The Wahoo, under the command of  Lt. Commander Dudley W. “Mush” Morton, attacked the Buyo Maru, one of the four ships in a Japanese troop convoy off the northern coast of New Guinea. After ~1,000 Japanese troops abandoned ship in 20 wooden lifeboats, torpedoes from the the Wahoo sank the Buyo Maru.

Dependent on where they were located during the action, crew members reported different accounts of of the actual events that followed. Surfacing amidst the lifeboats, the Wahoo reportedly received small arms fire as it approached the scene. In response, Lt. Cdr. Morton ordered the Wahoo’s 4”/50 cal. deck gun and .50 caliber machine guns to open fire on the lifeboats. A total of 282 men were killed.

Morton later stated his intention was to destroy the lifeboats so the Japanese troops could not reach friendly territory. After review by the chain of command, Morton received a glowing endorsement from Commander Submarines Pacific, Admiral Charles Lockwood.

Morton claimed killing “most of the troops” from the Buyo Maru, grossly overestimating the number at 1,500-6,000.  Sadly, it was later determined that 491 Allied Indian P.O.W’s were also aboard the Buyo Maru and 195 of them were killed in the Wahoo attack. The remainder of the ship’s 1,126 troops, P.O.W’s, and crew were rescued by the Japanese. All told only 87 Japanese were killed.

The USS Wahoo was sunk by Japanese aircraft in October 1943 while returning home from a patrol in the Sea of Japan.