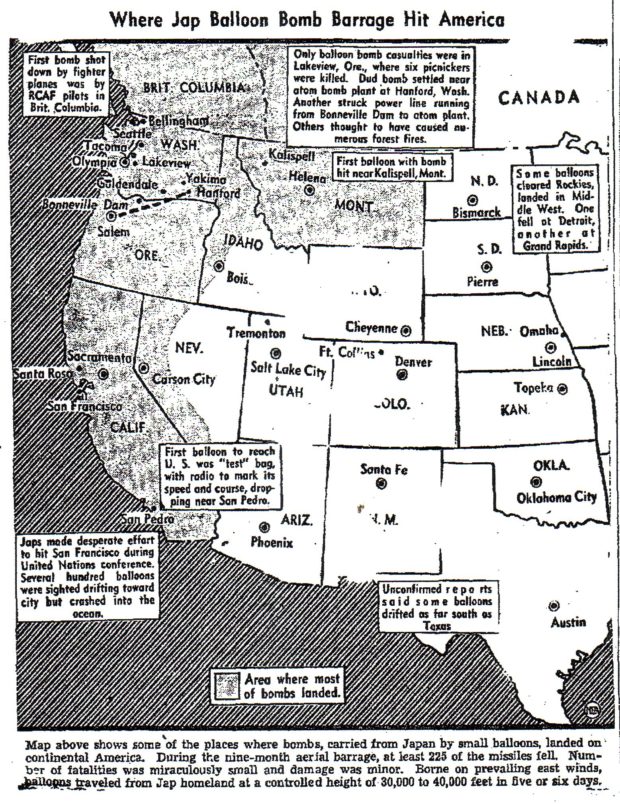 From November 1944 to April 1945, Japan launched over 9,000 hydrogen balloons carrying antipersonnel and firebombs into the jet stream from the island of Honshu. Although many found their way to diverse regions of Western North America, only one caused fatalities –  On May 5, 1945, a pregnant minister’s wife and five adolescents on a Saturday church outing were killed when they tampered with a balloon bomb that had landed in the trees of Gearhart Mountain in Southern Oregon.

When I moved to the northern Oregon coast in 2000, I became aware of this story and proceeded to research and write an historical fiction novel (with fictionalized characters) based on this event as well as the firebombing of the southern Oregon forest by a Japanese floatplane launched from a submarine and the attack on a Fort near the Columbia River by a Japanese submarine. Enemy In The Mirror: Love and Fury in the Pacific War, was published in 2012. Below is an excerpt from the book.

“Come here!” June called, waving from a point farther upstream.
Emma and the rest of the group picked their way among the rocks and clambered up the bank where June stood pointing at a clearing below. Great folds of tan colored material were tangled in the lower branches of a fir tree. They decided to investigate.
Emma paused on top of the bank before following the teenagers down into the clearing, and looked back at Arthur who was working his way up the stream bed to join them. “Come see what we found, dear,” she shouted gaily and slipped out of sight.
A large raven watched from a sun-bleached tree trunk that had been splintered by lightning. Emma could now see that the fabric tangled in the fir tree was made of quilted paper squares that appeared to have been lacquered. A metal object shaped like a cog wheel was hanging from ropes attached to a ring that gathered in the billowing fabric. The cog wheel device contained several metal containers, a barometer and an array of small sandbags. Emma thought it must be some sort of weather balloon. They’d been found around here before. Still, there was something strange looking about it.