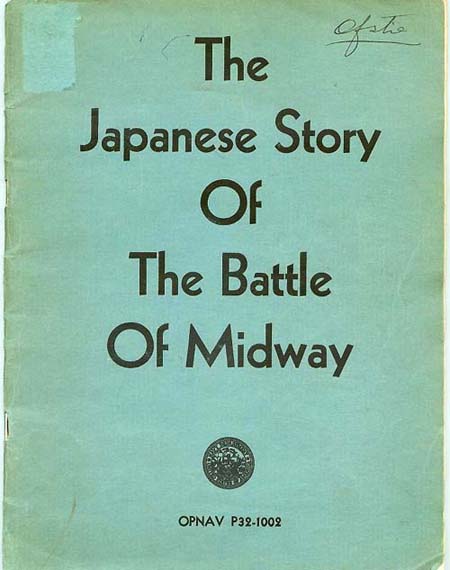 Excerpts from The Japanese Story of the Battle of Midway

Subsequent to the beating he received in the Coral Sea on 7-8 May, the enemy was temporarily subdued, but by the end of May — by the time the Fleet was about to sortie from Hashira Jima — the enemy again began to show considerable life in all areas, particularly in the Australia area.

Situation in the Midway Area: Midway acts as a sentry for Hawaii. Its importance was further enhanced after the loss of Wake and it was apparent that the enemy was expediting the reinforcing of its defensive installations, its air base facilities, and other military installations as well as the personnel.

Exceptional fighting was shown by all forces and all ships participating in this operation, and because of it, severe damages were inflicted on the enemy. At the same time, our losses numbered four carriers and the occupation of Midway was not carried out.

The enemy, however, having lost two of their powerful carriers and many of his air personnel, would undoubtedly be unable to effect any large-scale operation in the near future. It is believed that the enemy will surely strike back at some time, and every precaution should be taken against this.

Through this operation, there are some vital lessons learned in aircraft carrier warfare, which should be kept alive. These include such items as the reinforcements of searches for the enemy, flexibility of assembling and dispersing, and the speedy take-offs of friendly aircraft when the enemy is sighted.

1. The men of the plane units which succeeded in severely damaging enemy military installations on Sand and Eastern Islands in spite of persistent enemy fighters and vicious AA fire, are highly commended.

2. The action of the men of CarDiv 2 (less the Soryu), in succeeding to sink (or severely damage) two of the new and powerful enemy carriers in spite of the fact that the enemy had gained control of the air, must be commended highly. These men well represented our entire forces. The men of the Hiryu air unit (including 1st class P.O. (Air) Yamamoto from the Kaga and 3rd class P.O. (Air) Bando also from the Kaga) who sacrificed themselves by flying into territory which meant sure death and carried out “body crash” tactics, is particularly cited as being exceptional even in the traditionally glorious history of the Imperial Navy.