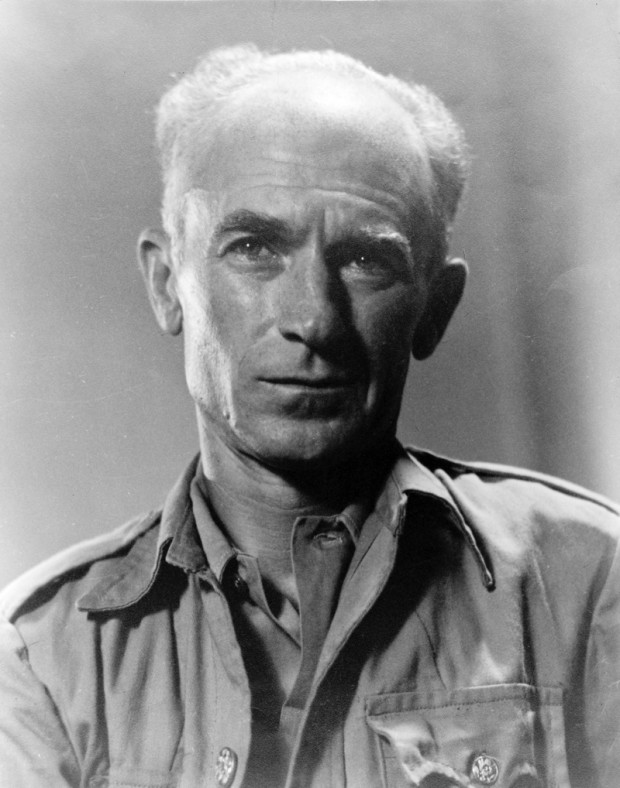 Ernest Taylor “Ernie” Pyle was a roving correspondent who reported from Europe and the Pacific theaters during WWII. Writing wartime columns from the perspective of the common GI, Pyle was enormously popular in WWII USA and won the Pulitzer Prize in 1944.

In April 1945 Pyle was killed on an island near Okinawa when his jeep came under Japanese machine gun fire.

Excerpt from The Death of Captain Waskow

“…This one is Captain Waskow,” one of them said quietly.

Two men unlashed his body from the mule and lifted it off and laid it in the shadow beside the low stone wall. Other men took the other bodies off. Finally there were five lying end to end in a long row, alongside the road. You don’t cover up dead men in the combat zone. They just lie there in the shadows until somebody else comes after them.

The unburdened mules moved off to their olive orchard. The men in the road seemed reluctant to leave. They stood around, and gradually one by one I could sense them moving close to Capt. Waskow’s body. Not so much to look, I think, as to say something in finality to him, and to themselves. I stood close by and I could hear.

Another man came; I think he was an officer. It was hard to tell officers from men in the half light, for all were bearded and grimy dirty. The man looked down into the dead captain’s face, and then he spoke directly to him, as though he were alive. He said: “I’m sorry, old man.”

Then a soldier came and stood beside the officer, and bent over, and he too spoke to his dead captain, not in a whisper but awfully tenderly, and he said:

Then the first man squatted down, and he reached down and took the dead hand, and he sat there for a full five minutes, holding the dead hand in his own and looking intently into the dead face, and he never uttered a sound all the time he sat there.

And finally he put the hand down, and then reached up and gently straightened the points of the captain’s shirt collar, and then he sort of rearranged the tattered edges of his uniform around the wound. And then he got up and walked away down the road in the moonlight, all alone.

After that the rest of us went back into the cowshed, leaving the five dead men lying in a line, end to end, in the shadow of the low stone wall. We lay down on the straw in the cowshed, and pretty soon we were all asleep.