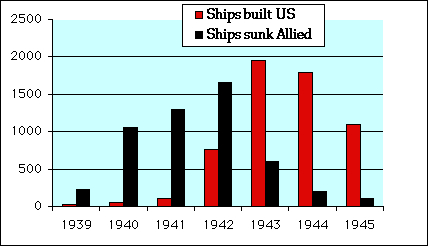 The majority of Allied losses were to U-Boats in the Atlantic. Although Germany was highly successful in the first part of the war, Imperial Japan never pursued an active campaign against shipping in the Pacific.

The overseas transportation of war materials and men by the U.S. Merchant Marine in WWII was key to Allied victory.  1 in 26 mariners serving aboard merchant ships in World WWII died in the line of duty, the greatest percentage of war-related deaths in all U.S. services.