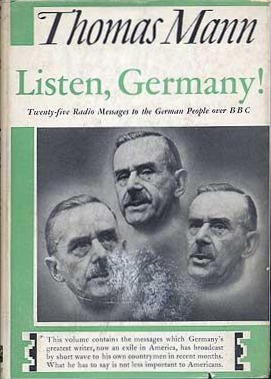 After the RAF firebombing of his beloved hometown Lübeck in March 1942, Mann spoke about the attack in a BBC Broadcast:

“...Now the time nears and is already here, when Germany must sob about its own sufferings, and this cause for sobbing will increase while a world which did not want such service to humanity , and was not prepared for it, adapts itself to its task of defense and becomes the apprentice who surpasses the master.

Did Germany believe that it would never have to pay for the misdeeds which its leap in barbarism enabled it to commit? It has barely begun to pay – over the Channel and in Russia. Also, what the Royal Air Force has accomplished so far in Cologne, Düsseldorf, Essen, Hamburg and other cities is only a beginning.

Hitler is boasting that his Reich is ready for ten, even twenty years of war. I assume that you Germans have your own ideas about that – for example, that after a fraction of this time no stone will stand on top of another in Germany.”