In 1946 the neuro-psychiatrist Viktor Frankl (1905-1997) chronicled his experience in Nazi concentration camps in his best-selling memoir Man’s Search for Meaning.

In this book, Frankl described how finding personal meaning allowed him to survive internment in Nazi concentration camps (Theresienstadt, Auschwitz, and two camps affiliated with Dachau (Kaufering and Türkheim).

After the war, Frankl established a new school of existential therapy known as logotherapy that maintained man’s underlying motivation, even in in life’s most difficult circumstances, is a “will to meaning.” Logotherapy utilizes several techniques intended to enhance a patient’s quality of life: (a) paradoxical Intention, where the therapist encourages the patient to briefly intend or wish for precisely what they fear (b) dereflection, where the therapist diverts the patients away from their problems towards something else meaningful in the world and (c) enlarging the patient’s discernment of meaning in at least three ways:  through creative, experiential or attitudinal values. 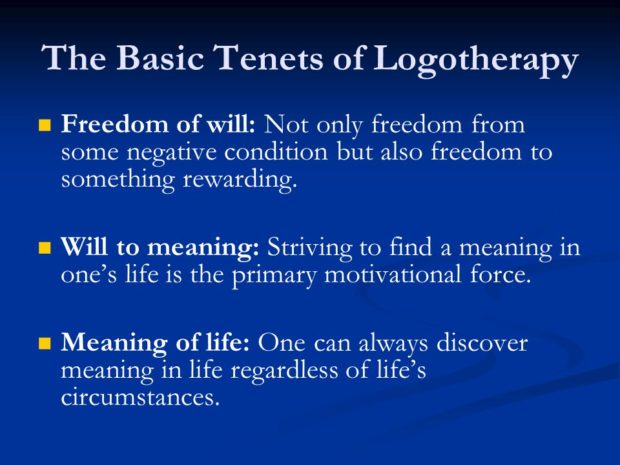