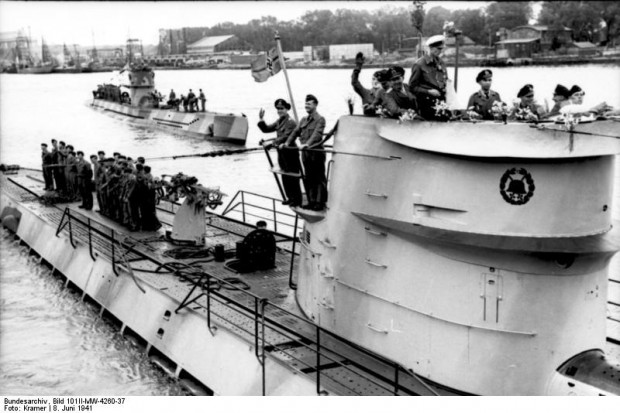 USS Atik  was a heavily armed merchant ship with concealed weaponry (a Q ship) that was designed to lure submarines into making surface attacks. The Atik had a crew of 141 men and an armament of four 100 mm naval guns, eight machine guns and six K-guns (depth charge projectors).

At 7:30 PM on March 27, 1942 the U-123 , under the command of Kapitänleutnant Reinhard Hardegen , firing from a surfaced position, struck the Atik with a torpedo on the port side. On fire, and starting to list, the Atik’s captain,  Lieutenant Commander Harry Lynnwood,  lured the U-boat within range of his guns was by ordering a lifeboat lowered on the starboard side. When U-123 maneuvered alongside, the Atik opened fire with all of her guns and depth charges. The bridge of the U-123 was slightly damaged and one German sailor was mortally wounded.

Hardegen ordered his deck gun into action and fled out of Atik‘s range before diving. At 9:29 pm the submerged U-123 struck the Atik with another torpedo. At 10:27 PM, as the Atik’s crew began evacuating their ship, the U-123 surfaced again. At 10:50 pm the Atik exploded and then a gale blew in, killing all of the 141 American sailors.