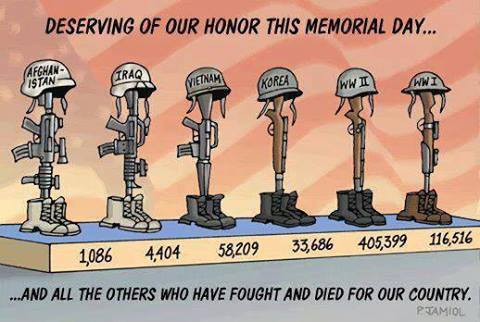 Now… for the second year of this great war, there are fresh graves on Guadalcanal, on New Guinea, in North Africa. In them are buried the hopes, the laughter, the enthusiasms of young men who were not weary of life. The sea is the deep grave of others whose burial place cannot be marked. And this is not the end. We are in the midst of battle. Young men must still die by land and by sea. Others nightly and daily, must take to the higher ceiling, clouds and stars, and some will not return. We remember and honor many of them today. There will be more to honor and remember tomorrow, and the day after tomorrow, and on many tragic morrows….

But not all we honor on Memorial Day died in battle. 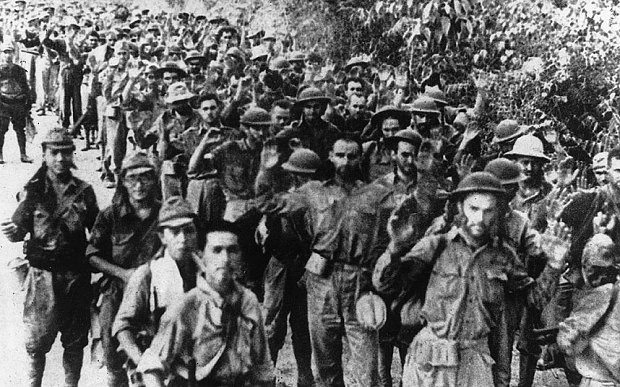 For example, ~half of the 24,000 Americans and nearly three-quarters of the 64,000 Filipino prisoners of war died during the Japanese occupation of the Philippines.

The death rate at the Carbanatuan POW camp was ~20 daily. Malaria, wet beri-beri, scurvy, blindness and dry beri-beri took a heavy toll, along with dysentery, yellow jaundice and dengue fever.

“…On Memorial Day, May 30th, 1943, the Japanese permitted services at the cemetery at Camp Cabanatuan in the Philippines. Every man in camp wanted to attend this special ceremony but only 1,500 were allowed to go. All but a small group of Chaplains were lined up outside the cemetery fence. A chorus sang “Rock of Ages,” and “Sleep, Comrades, Sleep.” Prayers were read by Protestant Catholic Chaplains and a Jewish Cantor gave part of the Jewish burial ritual. One could hardly recognize this plot as the cemetery of 1942. At that time the mud was shoe top deep, bloody water stood in the ditches and the air was full of the stench of rotting bodies. Now, the ant hills which had infested the cemetery had been destroyed. Graves had been built up and leveled off; paths had been made; the entire area had been ditched, the stream controlled, and white crosses with the names of the 2,644 who had died there, erected. Those attending the service returned to camp with thankful hearts that in these small ways loved ones had been cared for.“