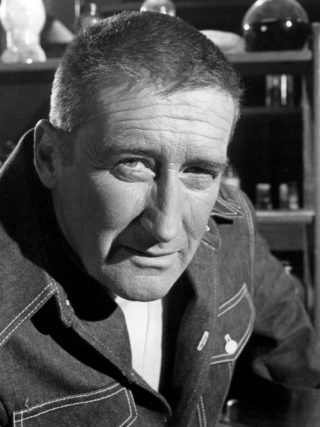 “Bestselling writer of shoot-em-up crime novels” is how the Guardian described him in a 2006 obituary.

“…The most popular of those books, of course, feature Spillane’s hard-boiled gumshoe/avenger Mike Hammer, the New York eye whose every case turned into a personal vendetta that — following a suitable number of trysts with beautiful and generally willing babes and raw scenes of brutality — inevitably ended with Hammer serving up his own kind of justice, usually out of the smoking barrel of a .45.”   –  The Thrilling Detective Web Site 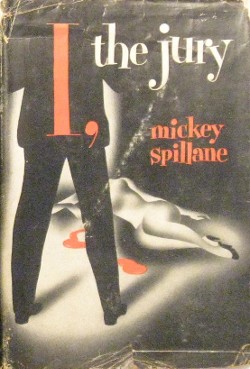 I, the Jury, published in 1947, launched Mickey Spillane’s crime-writer career.  More than 225 million copies of his books have sold internationally.

“Hammer is less a detective than an ultra-violent vigilante. I, the Jury lays down the formula. Mike’s marine “buddy” Jack, who lost an arm saving Hammer’s life in the Pacific, is sadistically murdered. Hammer sets out to avenge him, skirting the niceties of the law, vowing to his friend’s corpse: “I’m going to get the louse that killed you. He won’t sit in the [electric] chair. He won’t hang. He will die exactly as you died, with a .45 slug in the gut, just a little below the belly button.”  – The Guardian