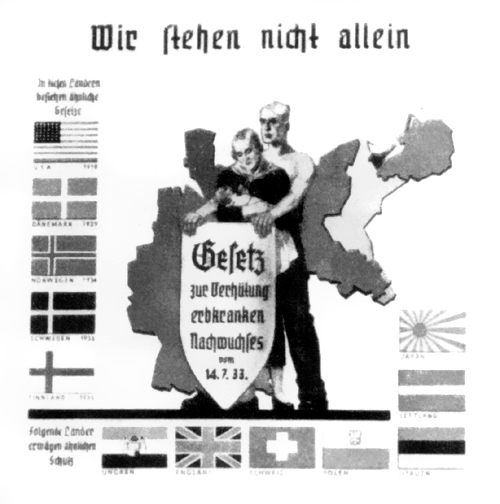 This 1936 Nazi propaganda poster saying “We do not stand alone,” shows a  woman with a baby and a man holding a shield inscribed with the 1933 Law for the Prevention of Hereditarily Diseased Offspring (mandating compulsory sterilization). Behind the couple is a map of Germany and the flags of nations that had or were contemplating considering similar legislation.

Enhancement of the Aryan race (Ubermenschen) was key to to Nazi ideology. Individuals deemed unworthy of life (Lebensunwertes) included criminals, degenerates, dissidents, developmentally delayed, homosexuals, idle, insane and the weak. In an attempt to eliminate these individuals from the chain of heredity, >400,000 people were involuntarily sterilized and 275,000 were killed under the Action T4, euthanasia program.