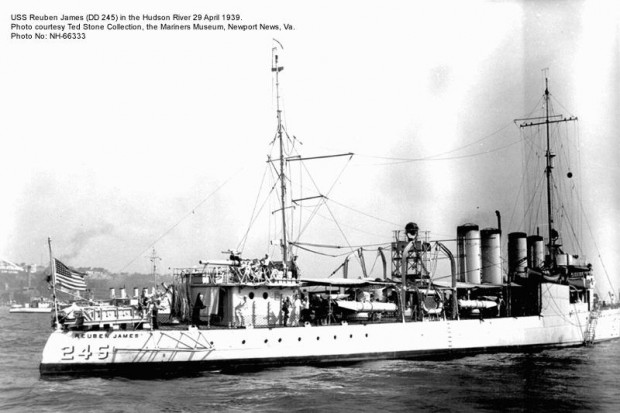 The American convoy destroyer U.S.S. Reuben James was torpedoed and sunk off Iceland with the loss of 115 of 160 crewmen on October 31, 1941. Although other U.S. ships had been torpedoed, the Reuben James was the first one sunk by Germany.

The Sinking of the Reuben James  – words & music by Woody Guthrie

Have you heard of a ship called the good Reuben James
Manned by hard fighting men both of honor and fame?
She flew the Stars and Stripes of the land of the free
But tonight she’s in her grave at the bottom of the sea.

Well, a hundred men went down in that dark watery grave
When that good ship went down only forty-four were saved.
‘Twas the last day of October we saved the forty-four
From the cold ocean waters and the cold icy shore.

It was there in the dark of that uncertain night
That we watched for the U-boats and waited for a fight.
Then a whine and a rock and a great explosion roared
And they laid the Reuben James on that cold ocean floor.

Now tonight there are lights in our country so bright
In the farms and in the cities they’re telling of the fight.
And now our mighty battleships will steam the bounding main
And remember the name of that good Reuben James.