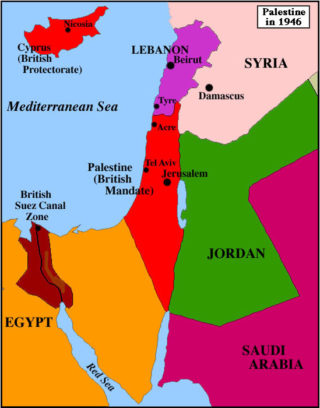 Britain, which controlled Palestine since 1917, promoted the idea of establishing a Jewish state in the holy land. With sympathy for Jews greatly enhanced after the Holocaust, the Palestine issue was brought before the newly created United Nations In 1946.

A UN plan to divide Palestine into three Jewish sections, four Arab sections and an internationally-administered city of Jerusalem, had strong support in Western nations and the Soviet Union, but was opposed by Arab nations. When the General Assembly voted, 33-13, in favor of partition, its six Arab nations walked out in protest.

On Nov. 29, 1947, the United Nations General Assembly passed a resolution calling for Palestine to be partitioned between Arabs and Jews, allowing for the formation of the Jewish state of Israel. 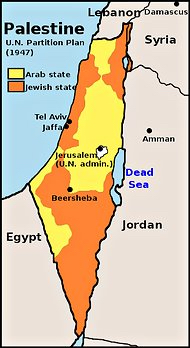 Reactions to the UN resolution were mixed and complex. Most Jews in Palestine and around the world reacted to the UN resolution with satisfaction, but some Zionist did not, feeling the plan was a renunciation of their legitimate claim to national territory. Arab states’ delegations declared they would not be bound by the decision, and walked out accompanied by the Indian and Pakistani delegates. Several Arab leaders vowed to forcefully thwart the partition.

After prolonged parliamentary debate, Britain announced in December 1947 that its mandate would end in May 1948, but it would not enforce the UN  partition plan. The partition plan did not come about smoothly. Outbreaks of violence between Jews and Arabs in mandated Palestine resulted in the outbreak of the 1947 – 48 Civil War.