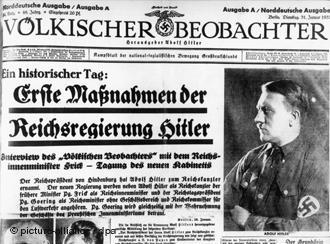 “The receptivity of the great masses is very limited, their intelligence is small, but their power of forgetting is enormous. In consequence of these facts, all effective propaganda must be limited to a very few points and must harp on these slogans until the last member of the public understands what you want him to understand by your slogan.”     –  Adolf Hitler, Mein Kampf 1926

Shortly after Hitler came to power in 1933, he leveraged “Aryan” fears of Jews and Communists to implement measures that restricted civil liberties and eradicated democracy. Opposition political parties were banned along with hundreds of their newspapers. Soon, the Nazi government also established control of the independent press.

Joseph Goebbels, Minister of Popular Enlightenment and Propaganda, assured that a “racially clean” German press spread the same message (Gleischaltung). Jewish and liberal editors and journalists were sacked. All remaining editors had to prove that they were not married to a Jew.

The Vőlkischer Beobachter, edited by the Nazi intellectual Alfred Rosenberg, was the Nazi Party’s primary media vehicle. Goebbels also had his own newspaper, Der Angriff  founded in 1927 with a front page column by ‘Dr G’. Another party newspaper, the fiercely anti-semitic Der Stűrmer was rumored to be Hitlers’ favorite.