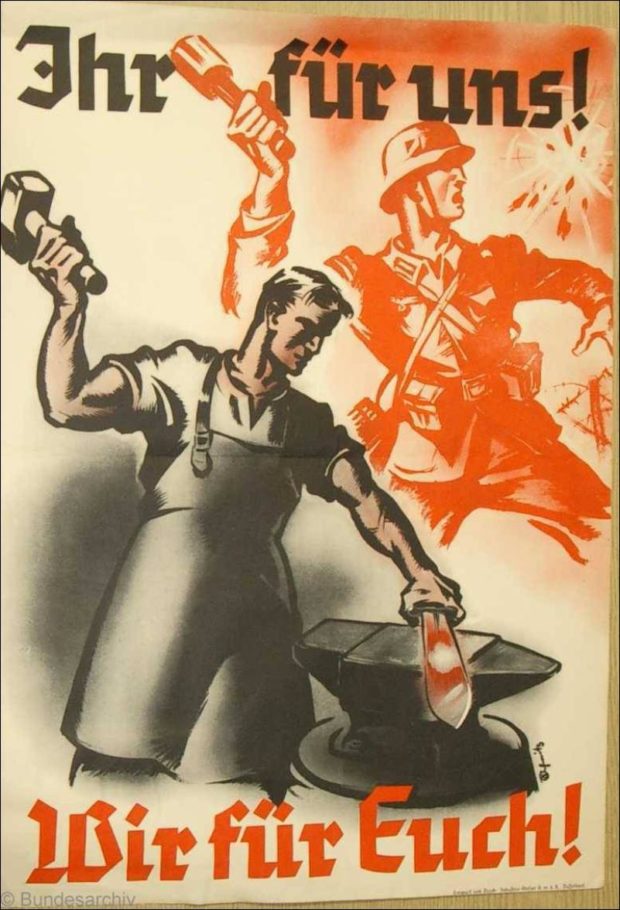 Using German archival records and letters and diaries of both civilians and soldiers during WWII, The German War – A Nation Under Arms, 1939–1945  by Nicholas Stargardt is a fascinating book that illustrates the strong civilian support for Germany’s armed forces right up until the end of the war. At the same time, the book shows how the ordinary German (civilian and soldier) rationalized atrocity and genocide as necessary for the good of the nation.

For a several decades after WWII, the myth of “good” Germans vs. the “evil” Nazis was maintained in post-war Germany. It wasn’t until the mid-1960s that the next generation began seriously questioning their parents about their role in the war. Finally, at the turn of the 21st century, a traveling German exhibition regarding the role of ordinary soldier (Wehrmachtsausstellung) showed beyond doubt the culpability of the ordinary soldier (not just the SS) in atrocity and genocide.

In 1985 the German President Richard von Weizsäcker delivered a speech to the Bundestag acknowledging WWII Germany’s evil deeds and proclaiming May 8, 1945 as the day of Germany’s liberation from despotism rather than surrender and occupation. Subsequently, reluctance to examine the facts about the Third Reich faded and critical inquiry expanded.

In my view, Japan has yet to come to similar realization regarding the terrible atrocities committed by its armed forces on enemies and civilian populations all over Asia. (Part of this fact may have paradoxically been due to the fact that much of Imperial Japanese history was skipped over in new textbooks during the reconstruction of the Japanese educational system by America educators after the war).

It was true that Western imperialism had abused and hobbled many Asian countries before the war. And certainly the decision to firebomb most Japanese cities in 1945 and ultimately drop atomic bombs on Hiroshima and Nagasaki left powerful moral questions about targeting civilians in wartime.

But Imperial Japan’s assertion that it was acting as a “big brother” to lead Western-colonized nations into the light of freedom was patently disingenuous. Imperial Japanese occupation of Asian countries was uncommonly cruel and rapacious.