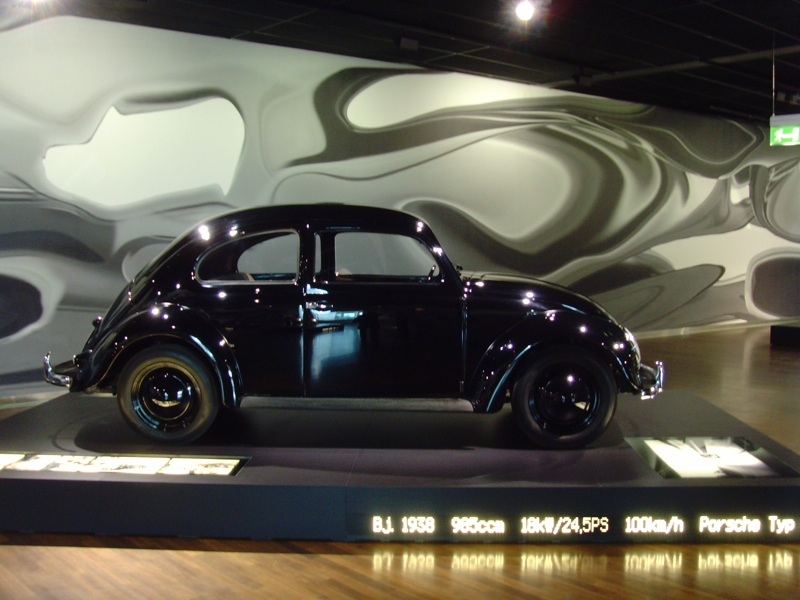 Volkswagen
1938 "Strength through Joy" (Kraft durch Freude) automobile In the early 1930s, most cars manufactured in Germany were luxury models and the average German worker with a monthly income of ~ 32 Reichsmarks could afford nothing more than a motorcycle. In 1933 Adolf Hitler demanded the production of an inexpensive automobile capable of transporting two adults and three children at 100 km/hr. When it became apparent that private industry could not turn out a truly inexpensive car, Hitler chose to sponsor an all-new, state-owned factory using Ferdinand Porsche's design to manufacture a Volkswagen (People's Car) that would be available to German citizens for 990 Reichsmarks through a savings plan. The new VW factory in Wolfsburg turned out only a few civilian models before the war broke out in 1939 and production was changed to military vehicles.
Read More 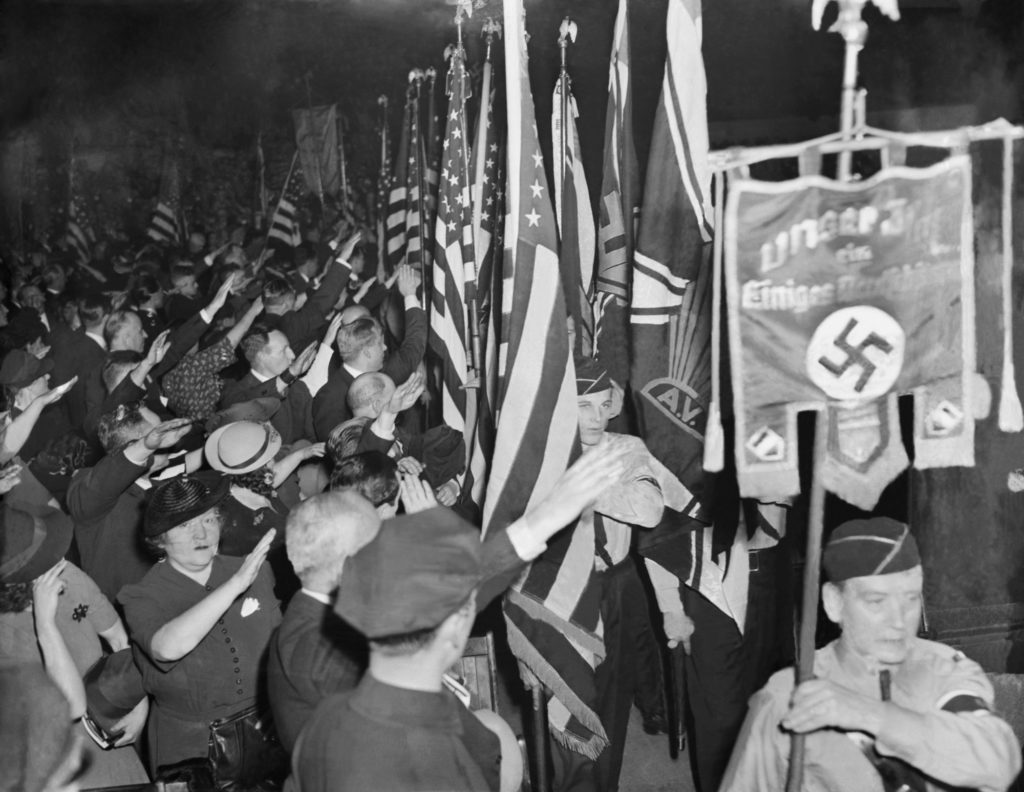 American Antisemitism
In a 1938 public opinion poll, 60 percent of  American respondents held a low opinion of Jews, labeling them “greedy,” “dishonest,” and “pushy.” Right-wing demagogues linked the Great Depression, the New Deal, President Roosevelt and the threat of war in Europe to the machinations of an imagined international Jewish conspiracy that was both communist and capitalist. Prominent anti-semites including Father Charles Coughlin, Henry Ford, Gerald L.K. Smith, Fritz Julius Kuhn, William Dudley Pelley, and the Rev. Gerald Winrod.
Read More 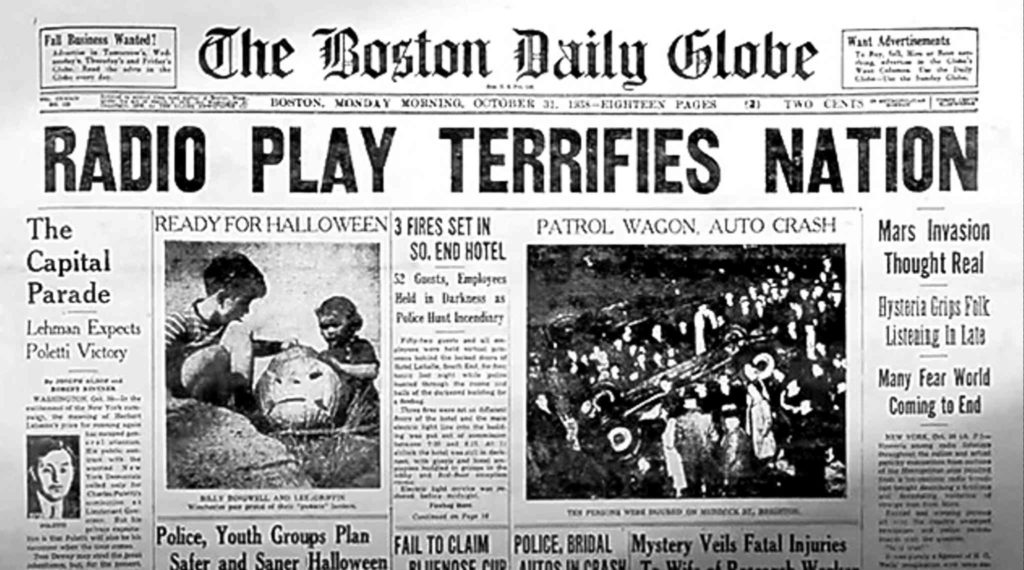 War of the Worlds
http://www.youtube.com/watch?v=gfNsCcOHsNI&feature=player_detailpage#t=1s On the night before Halloween 1938, a radio drama by the Mercury Theatre on the Air (styled as a newscast)  reported that a Martian invasion of earth was taking place. Countless frightened  listeners who thought that Martians had actually attacked, panicked. Was this a commentary on public anxiety regarding impending world war? Listen to the broadcast
Read More 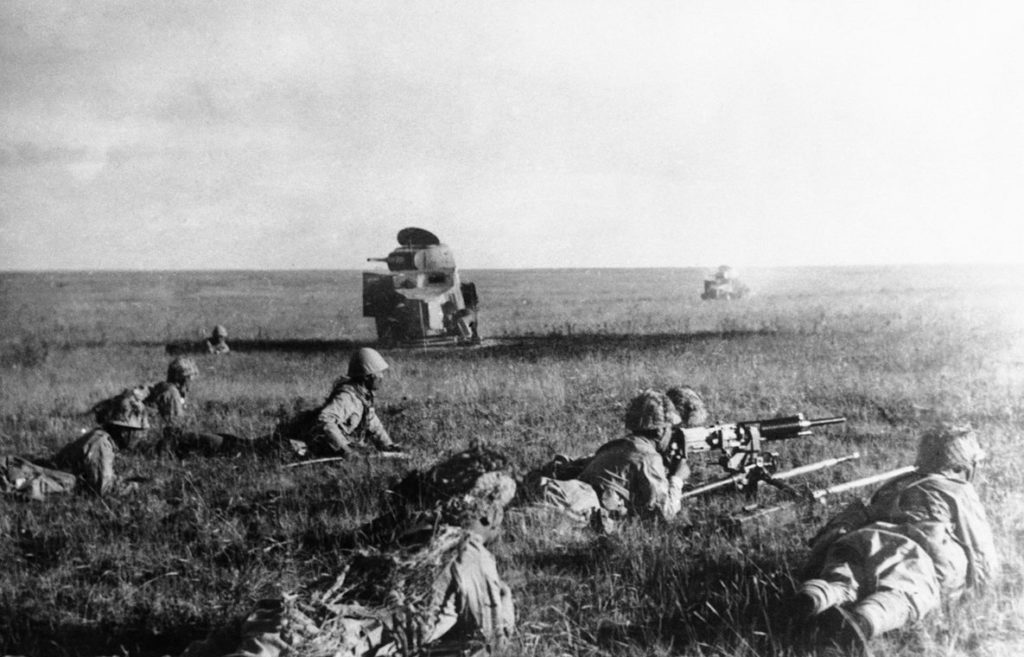 USSR – Japan Border War
Long-standing tension  between Japan and the USSR erupted into a battle along the Soviet-Korean border in July 1938. Utilizing rapid infantry deployment and transportation in a skilled frontal assault, Japanese forces had initial success, but were defeated soundly in August by larger Soviet forces.
Read More 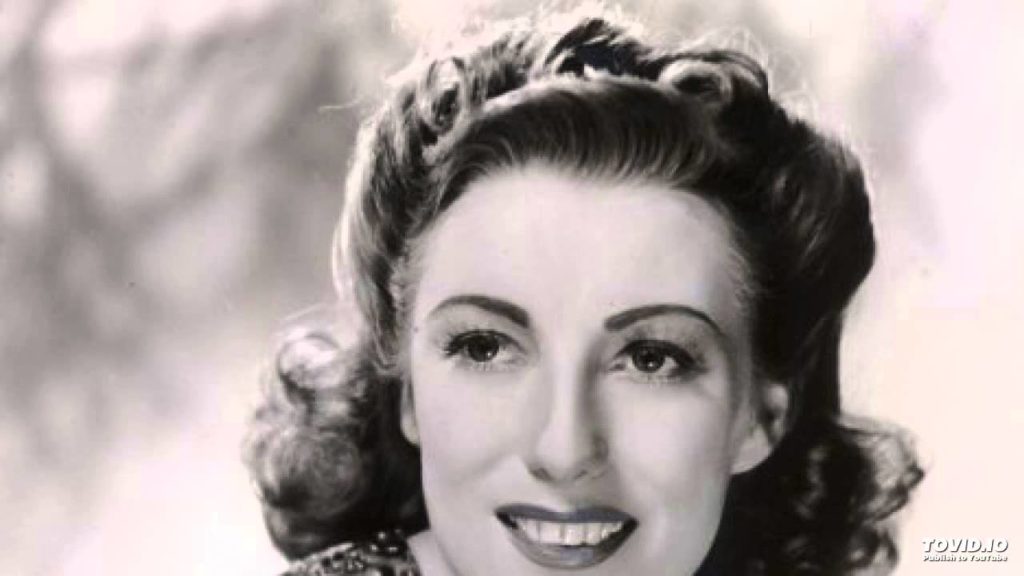 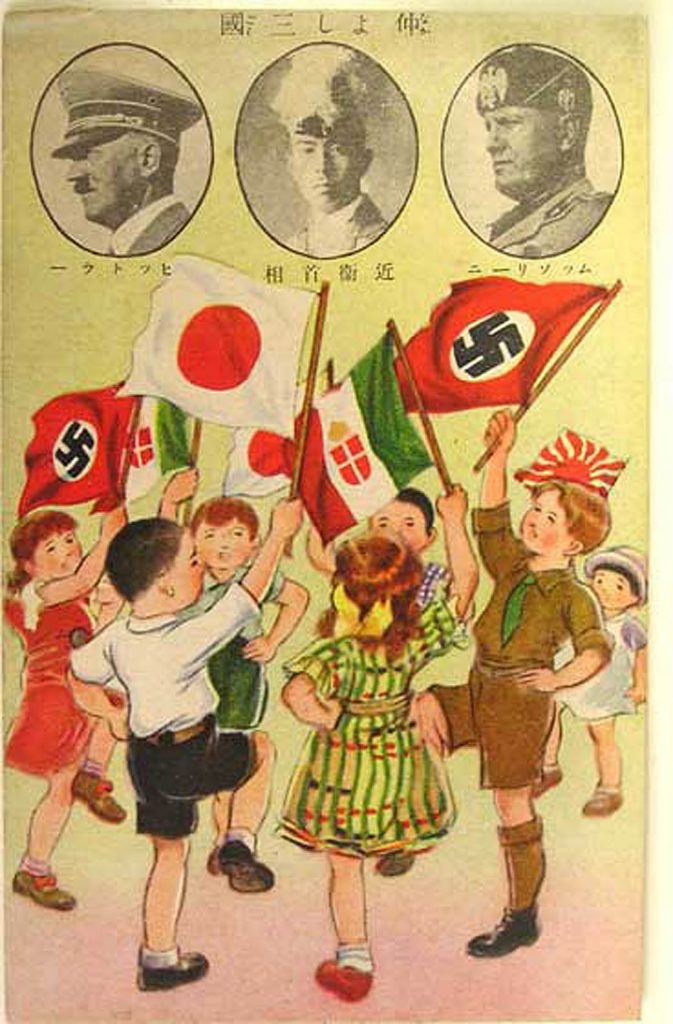 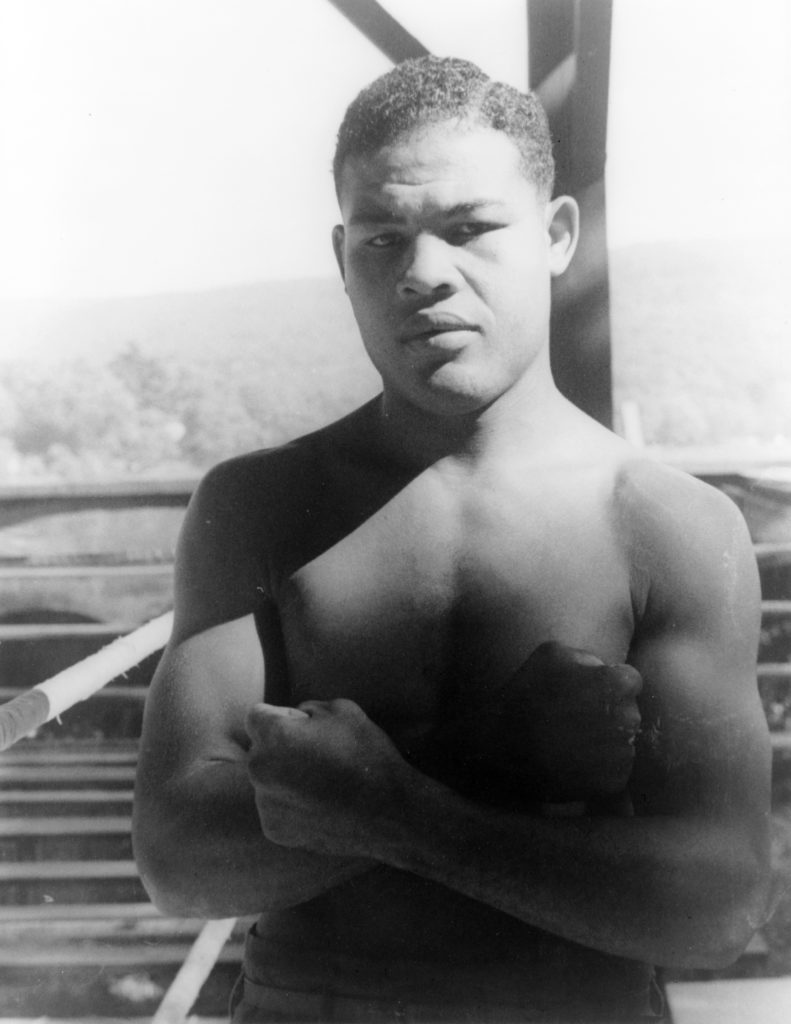 Joe Louis vs Max Schmeling – 2nd Match
Two heavyweight boxing events in the 1930s represented a contest between the USA and Nazi Germany, as well as black vs. white fighters. In 1936, former world heavyweight champion Max Schmeling defeated the previously unbeaten African-American rising star Joe Louis in the 12th round. In the second match in 1938, Louis won  with a first round knockout. Although the bout was acclaimed as a victory over Nazism, Schmeling actually had a Jewish trainer and considered himself an athlete, not a politician. After surviving the war as an elite paratrooper, Schmeling worked for Coca Cola in Germany and became a lifelong friend of Joe Louis.
Read More 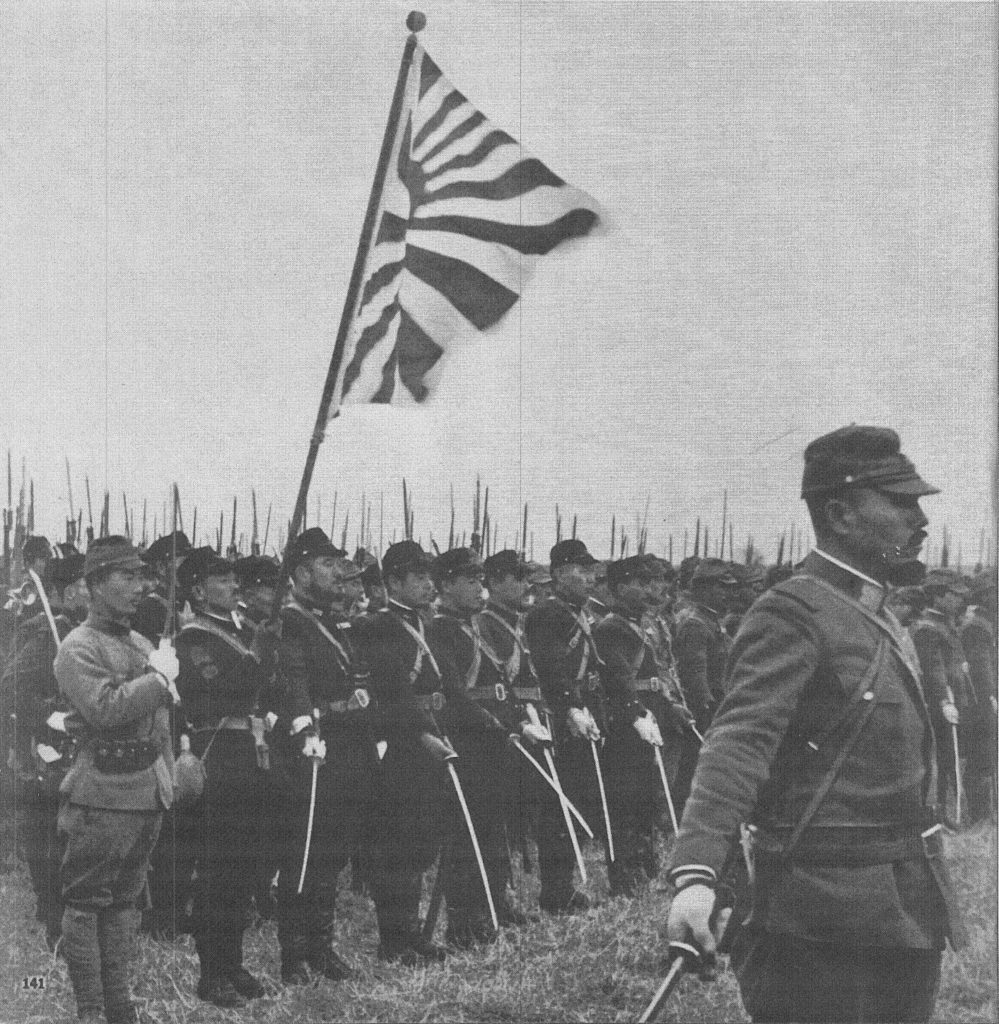 Japanese Military Spending
Japan weathered the Great Depression through exploitation of captive East Asian markets and a dramatic acceleration of rearmament. In1938 government spending on the military exceeded 70%, far more than wealthier democracies of the world.
Read More 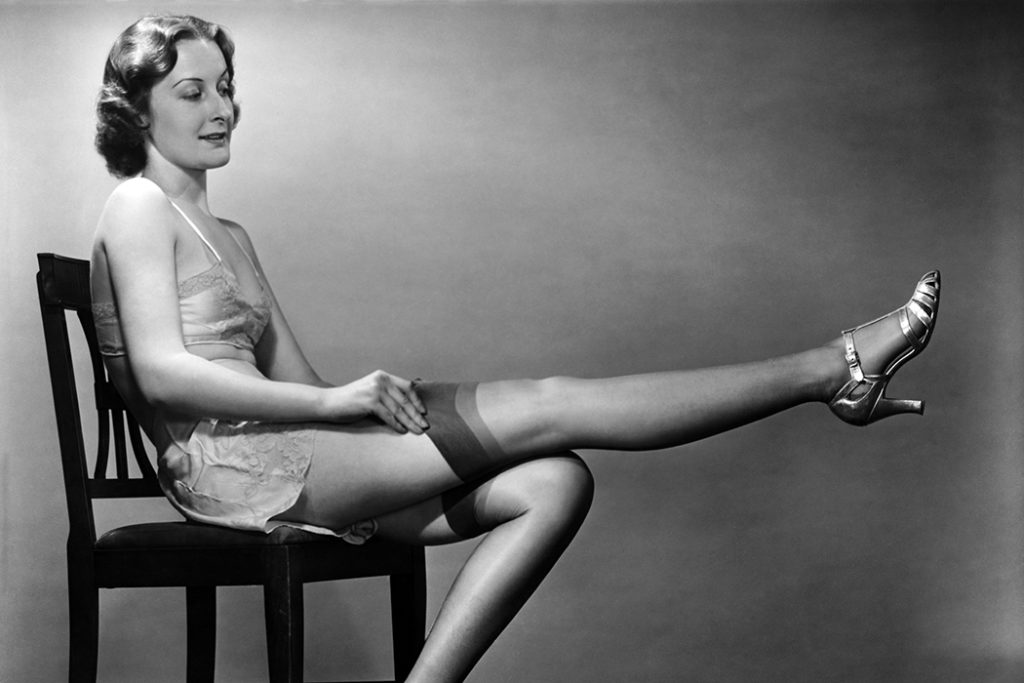 Japanese Silk Boycott
Increasing sympathy for China after Japan launched a major war in 1937 led to a boycott of silk products. Although a general boycott on all goods imported from Japan was proposed, raw silk was defined as "the lifeline of the Japanese militarists."
Read More 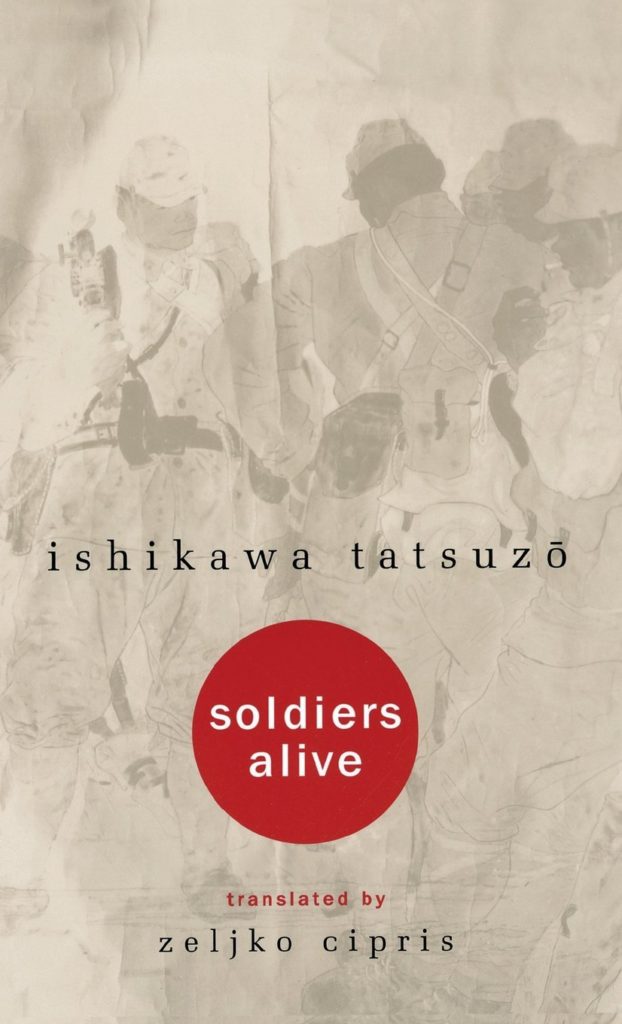 Soldiers Alive – Tatsuzō Ishikawa
In December 1937, the Chūōkōron magazine sent Tatsuzō Ishikawa to Nanking just after it fell to the Imperial Japanese army. Embedded in a squadron of soldiers that later would participate in the Nanking Massacre, Ishikawa wrote a harsh, but sympathetic fictionalized account (Soldiers Alive) of the pessimistic attitudes of young Japanese soldiers and the atrocities they committed. Although many of the controversial themes of the piece were edited out by the Chūō Kōron, the magazine was removed from the stands as soon as it was published and Ishikawa, the editor, and three publishers were arrested.  After several months in prison, Ishikawa was placed on probation for three years. Soldiers Alive was not published in its entirety until after the war.
Read More