The purpose of the Truman Doctrine delineated in 1947 was to counter geopolitical expansion of the Soviet Union. Initially, in place of direct military action, the U.S. Congress appropriated financial aid to support the economies and militaries of Greece and Turkey. Eventually, the Truman Doctrine implied American support for all nations threatened by communism. 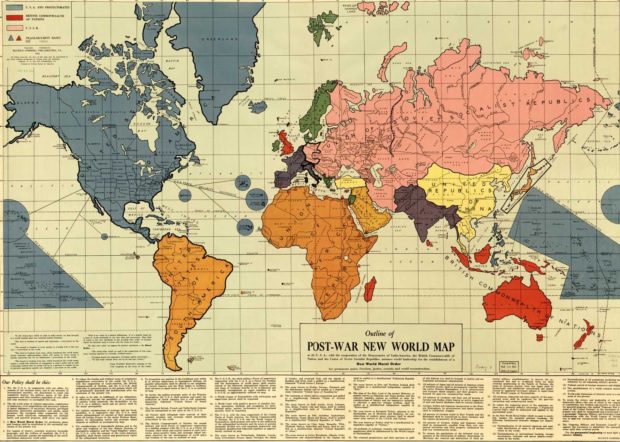 Published in Philadelphia in early 1942, this Post-War New World Map, created by Maurice Gomberg, proposes how the world might be re-arranged after an Allied victory over Axis forces.  (www.globalresearch.ca)

Here is an interesting summary of  the new world order from an opinion piece entitled The Trump Doctrine Is Winning and the World Is Losing by Kori Schake in the New York Times on June 15, 2018.

“Let’s review what, exactly, that order is. Beginning in the wreckage of World War II, America established a set of global norms that solidified its position atop a rules-based international system. These included promoting democracy, making enduring commitments to countries that share its values, protecting allies, advancing free trade and building institutions and patterns of behavior that legitimize American power by giving less powerful countries a say.”

(Unfortunately, these goals became so ideologically-oriented that America intervened in the political affairs of other nations and often supported repressive dictatorships as long as they were anti-Communist.)