During WWII, the U.S. Army had become the nation’s largest minority employer.  More than one million of 2.5 million African-American males were inducted into the armed forces by 1945. African Americans, ~11% of all registrants liable for military service, furnished approximately the same proportion of inductees in all branches of the service except the Marine Corps.

In June 1941, President Roosevelt, in response to complaints about discrimination at home, issued Executive Order 8802 that directed blacks be accepted into job-training programs in defense plants, forbade discrimination by defense contractors, and established a Fair Employment Practices Committee (FEPC).

In 1946, when Congress terminated the FEPC, President HarryTruman appointed the President’s Committee on Civil Rights. Included in the commission’s 1947 report, were anti-lynching and anti-poll tax laws, a permanent FEPC and strengthening the civil rights division of the Department of Justice.

In February 1948, when President Truman called on Congress to enact all of these recommendations, and southern Senators threatened a filibuster, Truman moved ahead with executive orders.  Truman’s orders bolstered the civil rights division, appointed  the first African-American to the Federal bench and named several African-Americans to high-ranking administration positions. 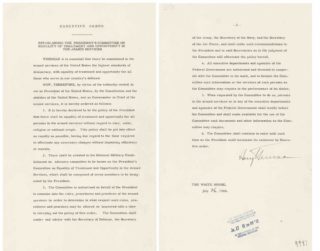