In June 1942, Japan seized Attu and its neighbor Kiska, establishing garrisons on these remote U.S.-controlled Aleutian Islands. Barren, and mountainous with extreme weather, the islands may have been taken to divert U.S. forces away from the planned attack on Midway Island in the central Pacific. A toehold on these islands also prevented a possible U.S. force buildup closer to mainland Japan. 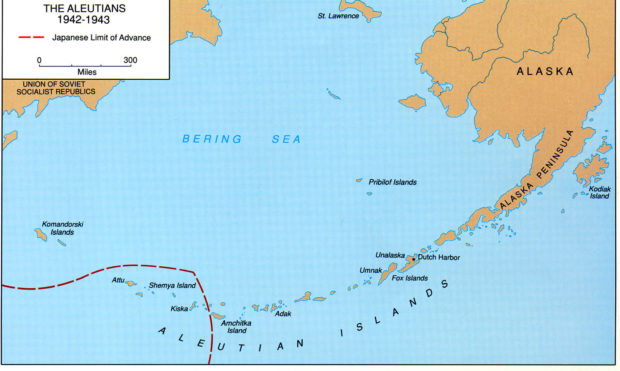 The Battle of Attu from 11–30 May 1943 was the only WWII land battle fought on incorporated U.S. territory. The battle ended with the death of most Japanese defenders in brutal hand-to-hand combat after a final banzai charge broke through American lines.

BANZAI CHARGE ON ATTU  – from History.com

Before dawn on May 29, 1943, Yamasaki and his remaining troops charged the American position in one of the largest banzai charges (an all-out, often desperate attack) of the Pacific War. Their sudden frontal assault on the Americans cut through U.S. combat posts and penetrated all the way to surprised support troops in the rear of the American camp. Brutal hand-to-hand combat followed until Yamasaki and his men were finally routed by overwhelming firepower. Most of the Japanese who were not killed in the ferocious charge committed suicide, in many cases by detonating hand grenades near their stomachs. Afterward, American soldiers counted more than 2,000 Japanese dead. Of the approximately 2,500 Japanese troops on Attu when the Americans landed, fewer than 30 survived to be taken prisoner. Some 1,000 U.S. troops died in the retaking of Attu.

A subsequent Allied landing on Kiska turned out to be a no show for the Japanese.  When the initial Allied invasion units reached the beaches on August 15, 1943, they found just four dogs and the corpse of a Japanese soldier. Deciding there was little value in hanging on to the Aleutians, Japan had evacuated the 5,000-man garrison three weeks earlier.