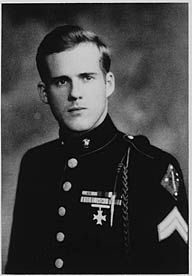 Here are excerpts from the American Marine Eugene Sledge’s diary ( published as With the Old Breed) when Sledge was at the battle of Pelieu in 1944.

Although Sledge wrote a year later at Pelieu, it’s not hard to imagine that this is was what the Japanese soldier Toshihiro Oura (in our last blog post) was facing in New Georgia.

It was hard to sleep that night [before the invasion.] I thought of home, my parents, my friends — and whether I would do my duty, be wounded and disabled, or be killed. I concluded that it was impossible for me to be killed, because God loved me. Then I told myself that God loved us all and that many would die or be ruined physically or mentally or both by the next morning and in the days following. My heart pounded, and I broke out in a cold sweat. Finally, I called myself a damned coward and eventually fell asleep saying the Lord’s prayer to myself.

The world was a nightmare of flashes, violent explosions, snapping bullets. Most of what I saw blurred. My mind was benumbed by the shock of it… Up and down the beach and on the reef, a number of amtracs and DUKWs were burning, Japanese machine gun bursts made long splashes on the water as though flaying it with some giant whip….

Even before the dust had settled I saw a Japanese soldier appear at the blasted opening. He was grim determination personified as he drew back his arm to throw a grenade at us. My carbine was already up. When he appeared, I lined up my sights on his chest and began squeezing off shots. As the first bullet hit him, his face contorted in agony. His knees buckled. The grenade slipped from his grasp. All the men near me…began firing. The soldier collapsed in the fusillade and the grenade went off at his feet…

I had just killed a man at close range. That I had seen clearly the pain on his face when my bullets hit him came as a jolt. It suddenly made the war a very personal affair. The expression on that man’s face filled me with shame and disgust for the war and all the misery it was causing.