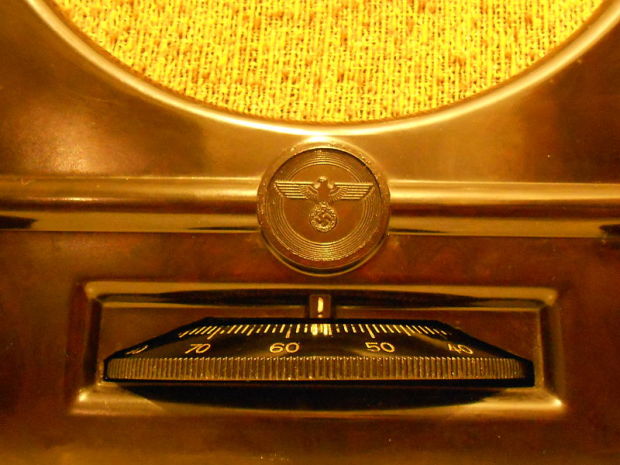 In the 1930s, most european radio stations were controlled by a government monopoly with emphasis on political programs. When Hitler came to power in 1933, the Reich Broadcasting Corporation became the major propaganda vehicle for the Nazi party.

From 1933-39, the Nazi government subsidized the manufacture of over 7 million affordable Volksempfänger (people’s radio receivers). Few Volksempfänger came with short wave, and sensitivity was generally limited to reception of local stations that broadcast propaganda, news, folk and classical music. Large version Volksempfänger were often wired to loudspeakers in public places.

At the start of the war in 1939, all radios sold came with a warning attached to the tuning knob: “Think about this: listening to foreign broadcasts is a crime against the national security of our people. It is a Führer order punishable by prison and hard labour.”

As the war progressed, many Germans realized that news from government broadcasts was deceptive and unreliable. But even the small Volksempfänger could provide long wave reception of the BBC or Radio Moscow after dark. Using more powerful pre-war radios or augmenting their Volksempfänger with antennas, many Germans took the risk of listening to Allied radio broadcasts.