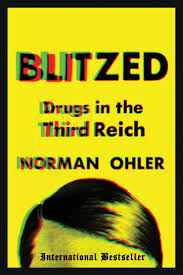 A new book by Norman Ohler makes sensational claims that not only Adolf Hitler, but much of the civilian population of Nazi Germany, was high on drugs. While there is evidence that methamphetamines (e.g. Pervitin)  were extensively used by the armed forces, it is dubious that this was the case of ordinary citizens.

Hitler was given an unusual (and inappropriate) amount of  injectable drugs such as vitamins, testosterone, other hormones, phosphorus, and dextrose by his personal physician Theodor Morell for symptoms including stomach pains, headaches, nausea, shivering and diarrhea. Hitler also apparently received IV oxycodone (Eukodal) and Pervitin on occasion, but the suggestion that he was an addict, high on drugs, during the last phases of the war seems to be hyperbole-and certainly no excuse for his evil behavior.